Widdecombe Welcomes the Return of Rupert the Bear 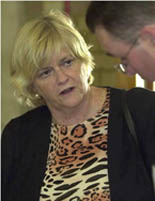 Two Early Day Motions you needn't be aware of. Firstly, the left wing Birmingham MP Lynne Jones has tabled one that read: That this House considers that the UK theme on BBC Radio 4 is extremely irritating. Number of signatures so far? One. Lynne Jones. And Ann Widdecombe has joined Andrew Rosindell in tabling EDM 1439 welcoming the remake of Rupert the Bear. You really couldn't make it up, could you? MPs should bear in mind that an EDM costs about £250 to table as it is printed in the Order Paper every day. The even more astonishing thing is that they get reported by the media at all. I forget who it was that referred to EDMs as Graffitti on the Walls of Parliament, but there has rarely been a truer word spoken. But if you really want to know why Widders et al (including LibDem Bon Russell and Labour's Lindsay Hoyle) are rejoicing at Rupert's return, read on and weep...

That this House wholeheartedly welcomes the return to British television screens of the much loved Rupert the Bear with his distinctive yellow and black scarf, red jacket and chums, after a 14-year absence; notes the timeless appeal of the adventures of Rupert and his friends as fine examples of traditional British children's entertainment since their debut in 1920; further notes the important portrayal within the animation of a youngster's nature as inherently good, with a love of adventure and the guarantee of a warm and welcoming homecoming; and encourages broadcasters to follow the lead of Channel Five and continue to remember the significant place that traditional British television characters should hold in children's entertainment in the 21st century.

At the risk of prolonging this just that little bit too long, the thing I used to enjoy about Rupert Bear as a child was the theme tune. Rupert, Rupert the Bear, everyone come and join. - n all of his games. Terrific!

Th price of irony perhaps? Perhaps if MPs compared the cost of each EDM and PQ with the salary of someone on the minimum wage or a lone parent on tax credits they may rethink. Fat chance!

I suspect Widders would not be campaigning for the most famous Rupert the Bear in the last 40 years: Try:

Neither of which are for the sensitive amongst you.

Check trousers and now trainers - Rupert has been turned into a Chav!

... personally I want Radio 4 to retain the UK theme because it is so completely annoying that I have to get out of bed and go and make some coffee as soon as it is announced. It does the trick every time, even if I have been promised the shippping forecast read by one of R 4's most honey voiced announcers will follow. (It's sad what you begin to find enticing when you reach a certain age).

If they do scrap it, perhaps the suggested replacement (yet more rolling news) could be read by people with very loud and grating voices. Ian Paisley would get my vote but I'm sure we would all have our personal faves.

As for Rupert, at this rate Widders and Co will be legislating for the return of the Ovalteenies and the compulsory wearing of liberty bodices between September and May.

Of course there is the manpower cost of the parliamentary assistant who has to hawk the damn thing around for signature. What a waste of time and money.

You can check out which MP signs the most EDMs on the www.parliament.uk website

Anorak comment alert.The singer who recorded the Rupert Bear theme tune Jacky had a top 20 hit with it in 1971.She'd hit the charts three years earlier with theme music from another children classic, 'White Horses'.
Always useful facts to know in conversation at boring dinner parties!