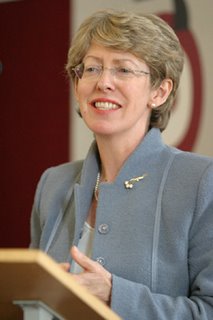 The Daily Telegraph reports this morning on its front page that the Health Secretary Patricia Hewitt wants to introduce MOT health checks for 40-50 year olds. Now far be it from me to be ahead of the times, but do remember on Tuesday I blogged about the Cost of Preventative Healthcare? I am just delighted that Patricia Hewitt not only reads this blog but takes notice of it! Needless to say Simon Heffalump in the Telegraph has already accused her of expanding the Nanny State, but if these tests are designed properly and seek to alert the patient to longer term dangers there ought to be a great cost saving to the NHS - that is, if people take heed of any warnings these healthchecks turn up.

This is what I wrote on Tuesday...

I've always thought that in this country we pay far too little attention to preventative healthcare. It's usually far cheaper than the alternative. Three years ago, when I was 40, I went to see my GP to ask for a full healthcheck, on the basis that having reached 40 I ought to have some sort of "body-MOT". I've always been in good health and had no reason to suspect anything was wrong, but I wanted to be sure. No can do, came the reply. I had a blood test and a cholestorol test but that was about it. So I left it. Someone I know died recently at the age of 38. He found out he had cancer and was dead four weeks later. I don't know if it had been diagnosed earlier anything could have been done, but it made me think. So today I decided to take the plunge and ring BUPA, with whom I have a policy. Yes, they said, they would happily do one for me, albeit not until 27 February. The health check would take two hours and consist of about 30 different tests and scans. And then came the sting. £350! Anyway, I've taken the plunge and booked myself in. If nothing else, I'll have peace of mind. I hope! But I do wonder whether someone might do a cost benefit analysis on giving every 40 or 50 year old a fairly comprehensive healthcheck and weigh up the the longer term costs of not doing so.

The other conclusion to draw from this is that I have obviously been 'Camerooned' as I am now forced to agree with the Government when it is doing something right. Does this signal the end of Punch and Judy political analysis on this blog? Will Eric Forth never speak to me again? The questions are endless... I think I'd better get ready to go and see West Ham v Blackburn...
Posted by Iain Dale at 10:41 am

Perhaps you should look at what is being offered before praising it to the heavens. This MOT health check is going to consist of er...

taking your blood pressure, a lifestyle questionnaire, and, maybe, a few blood tests. In other words nothing that isn't on offer at the moment!

I don't think I was going over the top. I do think it's a good idea, but I will look at the detail. If it's just a blood test and little else, it won't be worth it.

Yep, brilliant idea! Let's take a few thousand nurses off the intensive care, cancer and premature baby wards and get them out there with their clipboards and fatuous questions. That's the way to do it!!