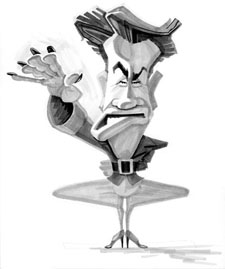 Many of you will be regular visitors to Tim Montgomerie's excellent ConservativeHome website, but in case you missed his post today on Michael Portillo, I thought I'd reproduce it here. I'm glad that, like me, Tim thinks Portillo has become something of a sad joke figure. I cannot abide his Sunday Times column and his appearances on Andrew Neil's sofa are becoming more bizarre by the week. His interview on Newsnight yesterday was sickening. Tim says...

"I was struck by the extent to which Michael Portillo seems to almost despise the right. Clipped for the programme the 'who dares wins ideologue' - who, in the 1990s, ignored those of us seeking a more one nation Conservatism - encouraged David Cameron to pick a (Blairite) fight with the forces of conservatism. He sees Mr Blair's abolition of Clause IV as a model for the new Tory leadership with right-wing (and undoubtedly pin-striped) MPs taking the place of nationalisation. Never mind that traditional Tory positions on Europe, crime and immigration etc resonate with the electorate in a way that Michael Footisms never did... Mr Portillo's dislike of the right has been evident in previous of his columns (see here for example) and was on show again in the most recent Sunday Times. Here are three quotes from his 15 January op-ed:

"Michael Howard displayed the memory of a goldfish when in 2005 he campaigned with the same attitudes that had brought the party crushing defeat in 2001." Memory of a goldfish? Is this a way to speak of a former cabinet colleague?

"The Conservatives’ mean-spirited stupidity in the last two elections has denied the public an alternative to Labour." Wasn't he Shadow Chancellor for the first of those mean-spirited campaigns?

"I was worried that Cameron had populated his shadow cabinet with reactionaries such as David Davis and William Hague." Didn't MP almost endorse DD in one of his many endorsements of the leadership election?

And my biggest question of all... Why does The Sunday Times continue to employ this man? He's reinvented himself more times than any politician worthy of serious respect. Let's all hope and pray that MP's chum Andrew Neil doesn't make him editor of The Spectator."

The last comment is rather worrying. Surely Andrew Neil couldn't possibly do that, could he? It does seem to be taking rather a long time to appoint Boris's successor. I'm given to understand that Peter Oborne has been ruled out by Neil for reasons best known to himself. The current favourites seem to be Iain Martin of Scotland on Sunday and The Times's Andrew Pierce.

Hat-tip for cartoon to Spot On Caricatures
Posted by Iain Dale at 5:49 pm

Oborne's very much not Neil's type of conservative. Neil's an economic liberal above all, with quite a lot of antipathy towards tradition and institutions - he did, after all, work for the Economist once upon a time.

Speaking as someone who's not a Conservative, isn't it fair to say that the Cameron ascendancy marks the triumph of reinvented Portillo-style Notting Hill Conservatism - and that therefore the Conservatives owe Portillo for their current popularity?

Why are you keeping quiet on Oatengate, Dale? What are you trying to hide?

I can't stand Portillo. The ultimate go with the wind politician. He can't stand the fact that the Tory party is prepared to change for Cameron but not for him. Can't he go back to Liverpool and work for ASDA. He would be doing the world a much better service if he did.

Portillo style politics is being nasty to other Conservatives. Cameron, (and I say this as a former Davis supporter), is a nice guy.

If Portillo had wanted his style of politics to succeed, he should have been more agreeable. He made so many enemies, that they danced on his political grave.

Now he is nothing more than a sad and bitter failure.

So he has won nothing, whilst perhaps holding up a re-evaluation of where the party stands, by makeing all right wingers hate him.