Labour: We've No Idea How Many Kiddy Fiddlers Work in the NHS (and have no intention of finding out...) 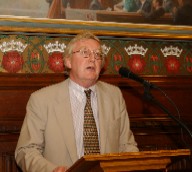 I don't know how often you visit NewLabourUnplugged.com, but it's worth a regular butcher's. Here's a taster...

Once upon a time critics used to say that the House of Lords was full of pompous Tories. Not any more. New Labour bulges with 'we know best' elitists like a fatty piling on the pounds with supersize burgers. A few even try and lord it over other peers. How about these classic asides from health minister, Lord ( Norman) Warner, a great pal of Jack Straw’s and a regular jackpot winner of quango appointments and other well paid government employment, for laid back arrogance?

'BARONESS SECCOMBE: Can he tell the House how many of those who have been cautioned for or convicted of a serious sexual offence are in the NHS and what he is doing about it? LORD WARNER: I speak as an ex-director of social services, so I have had some familiarity with the issue for some time.….this is a complex area. I do not have the exact figure that the noble Baroness, Lady Seccombe, is trying to get me to reveal, but we have done our utmost to ensure that none of those people has access to children.
EARL HOWE: The Minister said …. the Government did not hold information about the number of individuals employed in the NHS and social services whose names appear on the Protection of Children Act list. Would it not be a good idea to remedy that absence of information? Will the Minister take steps to do so?
LORD WARNER: My Lords, my right honourable friend the Secretary for State for Education made it clear that the Government would follow through on the legislation that they announced in the gracious Speech. We will bring forward the legislation implementing the Bichard recommendations, which will close a number of loopholes and strengthen the arrangements in these areas, by the end of next month.
BARONESS CARNEGY OF LOUR: My Lords, why is it impossible to answer the Question asked by my noble friend Lady Seccombe, which was followed up by my noble friend Lord Howe—how many people on the list are working in the NHS—with a straight answer?
LORD WARNER: My Lords, the noble Baroness may realise that there are 600-odd individual employers in the NHS. I gave the answer that I thought was appropriate to the Question.'

And that's it. Norman clearly thinks it is for him to decide what information is "appropriate" to give to Parliament, rather than actual Parliamentarians themselves. God knows how the kids in his care fared when he was a 'Director of Social Services.'Probably like the rest of us now - bullied and ignored.

Good stuff. Of course, if Her Majesty's Press was doing its job they would be following this up and putting pressure on the Govermment to come clean. So if a journalist is reading this, c'mon, do your duty.
Posted by Iain Dale at 7:21 pm

I seem to remember when my job was to write the answers to PQs asked about a large company with lots of red vans (you know the one)- if the answer was too difficult the helpful phrase used was, "The answer can only be provided at disproportionate cost".

Isnt this a case of why don't we have an answer - and if we don't then bloody well get one!