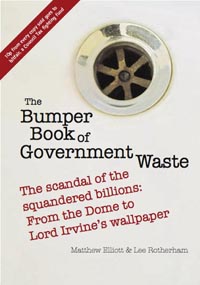 "Welcome to the world of waste. You are about to enter a twilight zone of crazy spending, political correctness, utter incompetence, and fantastic jollies, all funded by the British taxpayer." This is the BUMPER BOOK OF GOVERNMENT WASTE by Matthew Elliott and Lee Rotherham, soon to be published by the Taxpayers' Alliance. One example is the £225,000 scheme advising the elderly on how to wear slippers, quoted by Philip Johnston (Daily Telegraph). He also picks out the £40,000 the NHS spent, including "two £8,000 workshops, a £4,000 public meeting, two £1,600 meetings with children and three £600 in-depth interviews with mental patients," to establish that patients wished to be treated with honesty, respect and dignity.Matthew Elliot, co-author and chief executive of the Taxpayers' Alliance, puts the figure for waste at about £81bn, which is, he says, "more than the annual turnover of many east European countries, or £4,000 per family in Britain."

You can pre-order the book HERE - it's published on 7 February.

Courtesy of the Adam Smith Blog
Posted by Iain Dale at 8:14 pm