Chris Who to Join LibDem Race 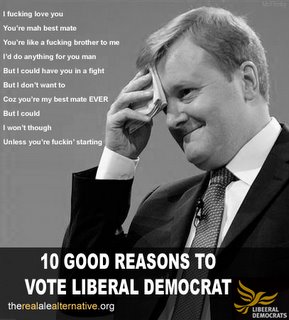 The LibDem leadership race took a new twist this afternoon with strong rumours that the man tipped by this blog weeks ago to run for the post would in fact do so. Chris Huhne is a Euro fanatic and the newly elected LibDem MP for Eastleigh, and someone I know a little. In fact, I think I'll go so far as to say that I'd back him purely because he is a fairly unique kind of LibDem in that he's got a great sense of humour. He is reported to have got 5 of the 7 nominees he will need. Personally I think the LibDems will be mad to go for either Campbell or Hughes and only slightly less mad to go for Oaten. Hughes and Campbell weren't the only ones to have an uncomfortable hour during PMQs. Oaten was on Andrew Neil's sofa and asked by Andrew Neil to respond to the claim by an anonymous Lib Dem MP that “Mark Oaten can be summed up in four words: unlimited ambition, limited ability”, Oaten replied “That’s more than four words”. He's make an ideal LibDem Shadow Chancellor. Indeed, his major policy announcement so far is to suggest that the commitment to tax people over £100,000 at more than 50% should be dropped. Instead, he thinks the limit should be £150,000. That should capture people's imagination. During my time working with David Davis I saw Oaten at work up close and I was less than impressed. He's very personable but fairly lightweight. Chris Huhne may have the balls which Nick Clegg has so far lacked. Ming Campbell's performance today has thrown this leadership race wide open, and Mr Huhne may feel that his moment has come. hat tip for graphic to www.b3ta.com

UPDATE: On Political Betting.com Sophia reports: . "I kid ye not but the headline in this week’s Inverness Courier is “I’m no alcoholic, says Charles”."

UPDATE 2: The Campaign for an English Parliament reports that Simon Hughes supports their campaign for an English Parliament. In a letter to them her wrote: Dear Richard, Thanks for much appreciated email. Please excuse a short reply now - a little busy! I am working to achieve a way forward that will reconcile Charles’s wishes and the party’s interests… and allow a proper election in due course. As soon as the position is clearer, I can make a decision about my own future but rest assured my support for an English parliament remains undimmed. Many thanks for your support. Simon

I have to say I'm not sure that view will go down too well with the sandal wearers.

UPDATE 3: Both Matthew D'Ancona in the Telegraph and David Aaronovitch in The Times argue for Nick Clegg to change his mind and stand. If I were a LibDem I would find their arguments extremely compelling.
Posted by Iain Dale at 8:05 pm

I see you neglected to mention John Hemming yet again, probably deliberately in order to force the Liberal Democrats into an error of omission. Shame on you!

Did you notice on the Courier article there's a mention of a council by-election a week before Christmas in a "previously safe Conservative ward with a 70% swing in the Lib Dems favour"?

As far as I can work out, that's a complete fib.

As a 'sandal wearer' I'm fine with the idea of an Enlglish Parliament. It's not impossible that it will be adopted as Lib Dem policy.

Apologies to John hemming for the omission!

As MEPs, Nick Clegg always seemed much more impressive than Chris Huhne.
If the contest is for who has the greatest opinion of their own abilities, then Chris Huhne could push Simon Hughes very close.