The Tease that is Mr Simon Hughes 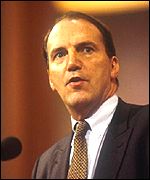 As Simon Hughes continues to tease the LibDems about whether he will stand for the leadership (You should bet your mortgage on it), he caused much merriment among Tory MPs this morning at the Parliamentary Breakfast Club. A siting of Hughes at the Commons breakfast table is about as rare as Derek Conway attending a meeting of the IDS Fan Club, but in he waltzed, accompanied by a lackey, believed to be the LibDem MP for Rochdale, Paul Rowen. But they didn't sit themselves at the table normally inhabited by kesser-spotted LibDems, they huddled in a corner and conspired over their scrambled eggs and black pudding. And then in came David Laws, who was presented with somewhat of a quandary. Should he, as convention demands, go and sit with Hughes, or should he sit at the LibDem table. In typical LibDem fashion he took the middle route and sat elsewhere for some more conspiring. Eee, I can hardly keep up.

PS All this talk of Ming Campbell being by far the most popular contestant in this leadership contest was belied by that most reliable of things, a SKY NEWS poll. Last time I looked, Simon Hughes had bagged 50% of the votes, leaving Oaten and Ming the Merciless trainling in his wake.

UPDATE 10.30am: Ming Campbell and Mark Oaten have just been spotted having a cosy coffee in the atrium of Portcullis House. What can it mean? Shouldn't we be told?
Posted by Iain Dale at 9:38 am

yes and after reading that, how can Hughes resist.

Ian you are wicked

YouGov had Campbell at 49% in their Telegraph poll a couple of days ago.

They got the Conservative leadership result almost spot on (only out by 1%), so Campbell is the firm favourite at the moment (but where have we heard that before!)

Someone on TV (I forget which show) said that Hughes won 70% of the vote in the recent-ish Party President election, so that shows his potential level of support (although he was up against Lembit Opik).

Campbell's poor performance at PMQ's leaves the door wide open for that Hemmings dream ticket to emerge. When will he get his go at the despatch box? ;)

Im not sure what it means - but spare a thought for Simon Hughes who turned up after the two announced candidates had left to go about their business - leaving him looking like a "Simon no mates". Luckily Lynne Featherstone was their to take this stray leadership contender in - as he joined her table.