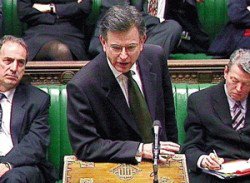 Sometimes I just despair. And today is one of those times. Earlier on today Stephen Byers was cleared of lying to Parliament by the Committee on Standards & Privileges. Instead they accused him of telling an "untruth". Could someone please explain to me the difference? It's all faithfully reported on the BBC Website. This Committee is one of the few not to have an inbuilt Labour majority. It has 5 Labour members, 3 Conservatives, 1 LibDem and 1 Plaid member. So Byers got away with it because 5 opposition MPs let him. At least, that's how it looks on the face of it. Perhaps someone could tell us whether there was a vote on this report, and if so, how the MPs voted. Stephen Byers has done more than virtually anyone else in the last 8 years to besmirch the honour of Parliament and by association, all of us who stand in Parliamentary elections. If he had any sense of right and wrong he wouldn't have stood at the last election. No doubt he'll be back in Blair's Cabinet when he finally be arsed to conduct his long-awaited reshuffle. That really would be the perfect ending, wouldn't it? Now, let's all take a bet on when Byers will be making his apology to the Commons. Who'll give me Evens on a wet Thursday afternoon with a one line whip?
Posted by Iain Dale at 5:23 pm

According to the minutes attached to the report of the committee (URL to relevant page below) the report was agreed by the entire committee; there were no divisions.

Anyone know who the Tory MPs are?I feel a letter asking them to justify themselves coming on.

I note that you limit the besmirching to the last eight years. Clearly he has not yet attained a high enough level to be promoted to the premiership of sleazebags that was the previous administration!

EVEN by wow gold the standards gold in wow of the worst financial buy wow gold crisis for at least wow gold cheap a generation, the events of Sunday September 14th and the day before were extraordinary. The weekend began with hopes that a deal could be struck,maplestory mesos with or without government backing, to save Lehman Brothers, America''s fourth-largest investment bank.sell wow gold Early Monday buy maplestory mesos morning Lehman maplestory money filed for Chapter 11 bankruptcy protection. It has more than maplestory power leveling $613 billion of debt.Other vulnerable financial giants scrambled maple money to sell themselves or raise enough capital to stave off a similar fate. billig wow gold Merrill Lynch, the third-biggest investment bank, sold itself to Bank of America （BofA）, an erstwhile Lehman suitor,wow power leveling in a $50 billion all-stock deal.wow power leveling American International Group （AIG） brought forward a potentially life-saving overhaul and went maple story powerleveling cap-in-hand to the Federal Reserve. But its shares also slumped on Monday.