A Message from our Sponsor 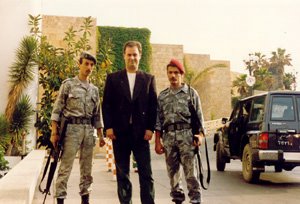 Today, this blog has had more hits than on any other day since it was relaunched at the beginning of December. And this despite me not posting anything until 7pm and Blogspot being down for half an hour this morning. To be honest I am astonished at how many hits it is getting. So thanks to everyone who keeps coming back. I guess it proves I must be doing something right and it gives me the incentive to keep going. I'd quite like to know what you like/don't like about it and have any suggestions you might have for how it should be developed in the future. I've several ideas myself which I hope to act upon in the next month or two. Should I, for example, emulate Guido and the Monkey and enter into the world of Podcasting? Would anyone actually be interested in downloading my weekly words of wisdom?!

PS The photo above was taken on a trip I made to Beirut in 1991. Because I was one of the first Brits to go to the Lebanon after John McCarthy was released I had armed guards the whole time. As you can imagine, I rather enjoyed it! Astonishingly I was there at the invitation of the Lebanese government to talk about transport privatisation. Quite an experience.
Posted by Iain Dale at 10:58 pm

I would suggest that you should make your site look more distinctive by having a template design of your own, rather than using one of the Blogger defaults.

Surely another caption competion for the superb photo above.

I’m no Conservative but I think your blog is one of the best political ones in the UK.

As for podcasting? I say go for it! You could do a lot for political podcasting in this country because so far (it seems) it’s just people putting out a party line rather than having a discussion.

I’m sure you could also get some interesting guests on to debate with…;)

Ian, I came to this site yesterday for the first time from the link to your top 25 Political Blogs on concervative home. I shall certainly come back regularly, however - good commentary and amusing in the bargain. As someone who was an occasional visitor to your Westminster shop, I regret it is no longer there as it was a great addition for those of us who ike to browse for political books.

Anonymous - I agree, I want to get the whole thing designed properly. Jonathan, feel free to start the ball rolling! Leon & Matthew, you;re too kind!

The blog needs a redesign - but the content is the most important thing - which is good already.

Also, I've added a link to your blog from mine. If for any reason you would like it removed, please tell me.

I think you have cropped the photo to hide the fact that you are wearing plimsolls without socks. I mention this because the rest of your ensemble is clearly modelled on Don Johnson's wardrobe in "Miami Vice".

Seriously, your site is intelligent, informative and entertaining and I'm sure a podcast would be a very worthwhile experiment.

I like the amusing anecdotes, political gossip, the lack of long worthy-but-dull polemics, and the focus on national politics.

Clearly, you're knowledgable and capable of seriousness. I don't think this blog would be a good outlet for that though.

If you do launch a podcast, I think you should show your more serious and ideological side. Because of Politicos, you're well-known and would probably find little difficulty getting interviews with interesting guests, and truthfulness from them. You could easily become the number one podcaster on the UK centre-right. And presumably it wouldn't do your media career any harm.