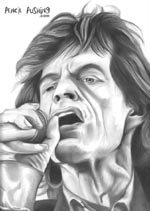 As the Margaret Thatcher musical opens in Warwick I hear that the Iron Lady has an unlikely fan in Sir Michael Jagger of the Rolling Stones. According to the CITYSPY column US Congressman Mark Foley Mick Jagger told him that in the 1970s the Rolling Stones would do a certain number of gigs, then quit for the rest of the year. "The government was taking 95% of our earnings in tax, so it just wasn't worth it. But Mrs Thatcher changed all that. Thank God for Maggie Thatcher!" A sentiment this blog wholeheartedly endorses. Natch.

hat-tip for graphic to www.pencilpushing.com