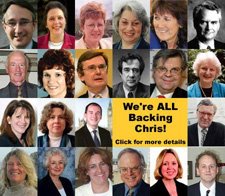 I bumped into Chris Huhne today at 4 Millbank and said I was forming a group called Conservatives for Huhne. He laughed and asked if that meant he would get free blooks from Politico's. I replied that this might be interpreted as a bit sleazy and more sleaze was the last thing the LibDems needed right now! He roared. And when I got home tonight I found an email from someone asking I am really supporting Chris Huhne, as I am listed on his WEBSITE as a supporter. I think I should perhaps make clear that there is another Iain Dale in Ayrshire who is a LibDem activist and I assume that it's him they list! That's my story, and I'm sticking to it. We wouldn't want any Iain Dale to Defect to LibDems rumours starting, would we?! I also ran into Norman Lamb and we exchanged cheery hellos. His was accompanied by a knowing chuckle.
Posted by Iain Dale at 9:12 pm