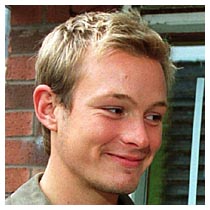 I see the A List of Conservative Candidates is rearing its head in the press again today. Ann Widdecombe in typical understated fashion calls the whole idea 'diabolical'. David Cameron will be making a speech about it tomorrow at the think tank DEMOS. Apparently we are all getting letters this week outlining the whole procedure and asking us to apply to be on the A List, or Priority List as it's officially called. One interesting dilemma for the Candidates Department will be to decide what to do with the likes of Zak Goldsmith - will he be made to fight an unwinnable seat or drafted immediately onto the A List? He was on Question Time this week and made one of my female friends (who's a leftie) go weak at the knees. This Thursday she'll get another chance to view some male Tory 'totty' when Coronation Street's Adam Rickett gets a runout. He played Gail Platt's son, Nicky Tilsley, who kept going off to Canada. Adam has a very, er, revealing website which you can see HERE. He got onto the candidates list in October. And I'm the proud owner of his hit single I BREATHE AGAIN. It's rather catchy actually!
Posted by Iain Dale at 5:01 pm

Genius! Can't wait to see him tackle the high-brow issues of the day. :D

I do hope you will be applying to the A List, Iain?

I was once at a concert where a somke bomb was thrown at the performer on stage - Adam Rickett. What was he singing? "I breathe again". You couldn't have made it up.

On the subject of celeb candidates, i'd be curious to know if Iain know's if there is any truth in the Tim Henman rumour that was on on the Guido and the Monkey podcast

Please tell me that this is a joke. Anyone else recall when the former editor of Smash Hits and Sun columnist Emma Jones was sent on the programme and revealed how little she knew?

Has anyone heard him speak on political issues? If not I think we should at least give him a chance. Just because he is a singer/actor it doesn't mean that he is think.

I was surprised enough when I saw he'd got on the candidates list a few months ago to look up information about him, and found he turned down a place at Cambridge (I think to read law) to go into acting.

I would not call him an actor!

Mr Dale should be disqualified from the Priority List for having the poor taste to buy his "single".

What other tat have you bought recently?

i hate helen worth
(gail platt )