Did Michael Howard Win it for Dave? 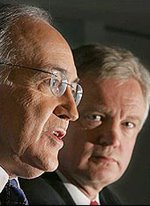 Somone who deliciously calls himself the Milky Bar Kid posts on PoliticalBetting.com this interesting little morsel...

"I got an interesting piece of goss, nay a confession from Saturday…. Michael Howard was at a local association function, and he effectively confessed to what we all knew - that he deliberately set up a long contest so that DC could win, or, as he put it “so that everyone would get a fair crack at it”… "

Now to all us conspiracy theorists that sounds all well and good. But when you think that MH wanted to change the rules so that only MPs voted, the contest would actually have been over in late July. And DD would probably have won. Unless, as Esther Rantzen used to say, you know different.

Having said that, there were several other things MH did (see previous posts in early December) to help David Cameron and the scupper DD, but this, I don't think was one of them.
Posted by Iain Dale at 6:06 pm

Iain - Howard wasnt that keen on the leadership rule change. He even came to the rather stormy National Convention meeting (of senior voluntary party members) and said that the proposal was, and I quote, "not his prefered option".

The reception the proposals got was very negative. All but a handful got up and condemed the changes (me included). Even Howard, who was given a heroes welcome after the general election, didnt get a very positive hearing.

The vote on the rule change wasn't put to the membership until late September.
Therefore, even if the rule change had gone through, the leadership election would have been unlikely to have been concluded before November.
Wasn't there also supposed to be time to consult party members before the MPs started to vote? If so, this could have meant that the contest would have lasted until the start of December, even without OMOV

Maybe MH knew that the rule changes would be defeated? Then he would get his way, but cover his tracks.

As certain conspiracy theorists like to say, the world is run by a very cunning race of people. Mr Howard is one of them so who knows? :)