The Man Who Did for Ming 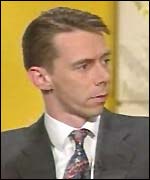 This is Mark Littlewood, the Head of the LibDems' Press Office. This is the man who singlehandedly scuppered Ming Campbell's leadership campaign. According to Wat Tyler this is the man who dreamed up the "headteachers" question that Tony punished so ruthlessly at PMQs. Wonder if he will be performing as heroically this week? Mr Littlewood was Director of Campaigns at Liberty (the National Council for Civil Liberties) and apparently used to double up as an occasional sports commentator for SKY SPORTS. I wonder if he secretly doubles as Simon Hughes' Campaign Manager too?
Posted by Iain Dale at 4:46 pm

The perso who is really responsible is Ming Campbell. If he was too daft to see what he was doing, that's his lookout.

No doubt Wat is privy to bags of goss, but Littlewood was actually blamed in the papers several days ago... the Indy or Standard I think.

Ah. That had escaped me. Must be cos I don't read tabloids...! Believe that and you'll believe anything!

Anyway, I read Wat Tyler as being rather dubious about the claim that Mark Littlewood was to blame: "And we are even to believe Ming's disastrous showing at PMQs was actually not down to him."

That doesn't sound to me the words which would be written (if written words can sound!) if you believed the claim - isn't he being sceptical of it?

Mark Littlewood used to be a Tory didn't he? I think he was when first appointed at Liberty.

Mark Littlewood was not responsible for the question concerned. Members of Cowley Street staff are not involved in the leadership campaigns and the questions that week were vetted by Menzies leadership team, using a range or suggestions from the Cowley press and policy teams. A gaffe by all concerned with the man at the top taking it on the chin as it should be.

The rather poisonous comments and tone of voice in the Scotsman article say rather more about the person planting the story. The same person who also planted the original piece in the Standard. Members of rival campaign teams with access to Cowley Street, a political reason to sow dissent in the Campbell campaign and in frequent communication with diary columnists can be counted on one finger.

One of the rival leadership contenders would be well advised to either control his minions more effectively or do a better job of covering up his team's anonymous briefings than happened during the exit of Charles Kennedy. Of course you'd have to have had a leadership team in place before Kennedy resigned to be responsible. Who was that I wonder?

That last sulky commenter is Ed Fordham, and I claim my five pounds.