From Thatcher to Macmillan? 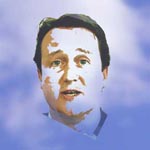 A source close to the Conservative Whips Office has just called me to say I shouldn't read anything into it - now, would I? - but the venue of tomorrow's meeting of the Conservative Parliamentary Party has been moved. It is to be addressed by David Cameron and he will explain where he is going over the next couple of months. The meeting was to have been held in the Thatcher Room in Portcullis House, but it's been shifted to the Macmillan Room... No doubt free copies of "The Middle Way" will be liberally dished out! In case the Thatcherites among us sniff another sign of the Thatcherite legacy being ditched, it's not so. The Thatcher Room is needed for a televised Select Committee. So there!
Posted by Iain Dale at 7:21 pm

When it comes to truth and the legend though, print the legend.

Is it just me or does tht pic look like dafydd thomas off little britain?