The Cost of Preventative Healthcare 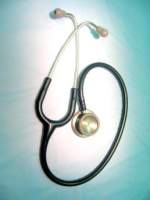 I've always thought that in this country we pay far too little attention to preventative healthcare. It's usually far cheaper than the alternative. Three years ago, when I was 40, I went to see my GP to ask for a full healthcheck, on the basis that having reached 40 I ought to have some sort of "body-MOT". I've always been in good health and had no reason to suspect anything was wrong, but I wanted to be sure. No can do, came the reply. I had a blood test and a cholestorol test but that was about it. So I left it. Someone I know died recently at the age of 38. He found out he had cancer and was dead four weeks later. I don't know if it had been diagnosed earlier anything could have been done, but it made me think. So today I decided to take the plunge and ring BUPA, with whom I have a policy. Yes, they said, they would happily do one for me, albeit not until 27 February. The health check would take two hours and consist of about 30 different tests and scans. And then came the sting. £350! Anyway, I've taken the plunge and booked myself in. If nothing else, I'll have peace of mind. I hope! But I do wonder whether someone might do a cost benefit analysis on giving every 40 or 50 year old a fairly comprehensive healthcheck and weigh up the the longer term costs of not doing so.
Posted by Iain Dale at 6:05 pm

I hope you think more of your BUPA check-up than I did of mine (which I didn't have to pay for - my benevolent employer coughed up).

The tests seemed impressive enough however the report was long on text but short on detail – the sort of thing a management consultant might produce after he’d borrowed your watch to tell you the time. What little there was that I hadn’t told them (‘we were pleased to learn that you drink less than forty pints a week’) had so many caveats that it seemed pretty close to worthless to me. And it completely failed to find any cause for my grumpiness.....

If you want detailed precision you will need something wrong with you.

Hope for a few pleasing generalities

I also tried to get a full check up a few years ago and was told it was not possible. A year later I had a very minor stroke, I only knew what it was because they run in our family and I was very aware of the signs. My GP was quite dismissive and only took blood tests. Thanks to private insurance I had all the necessary tests which proved I was correct. The tests cost in the region of £1000 and I was put on medication which will, I hope, prevent another TIA.
My mother was taking these mini strokes for years but was never diagnosed or treated and we didn't know, just though she was getting older. Eventually she took a massive stroke resulting in two months in hospital and three years in a nursing home. I think that is a pretty obvious cost/benefit analysis don't you?

Iain I think the is an excellent idea.

I have long felt that a goal for the NHS should be that eventually everyone at a certain age should be allowed some form of comprehensive health MOT every year or two dependent on feasibility.

It should be part of a general trend to move health, slowly but surely, towards more preventative and proactive treatment ahead of reactive treatment.

It is something I would like to see as a long term goal of any major political party and hopefully the Conservatives - perhaps they could do some form of deal with providers like Bupa to help facilitate this?

Further to my letter above re strokes. My friend in Scotland can get a regular full check up. It was found that she had early type two diabetes and she is now being treated before any damage was done. I would like to know why this is available in Scotland but not in England.

Sorry my previous comment reads as more curmudgeonly than I intended. As anonymous says, I expect they'd have picked up anything serious. It was the 'style over substance' of the report that most bothered me.

But I do recall being summoned to my GP's surgery for a 'well man' session. This was with a nurse I think and it consisted of questions about lifestyle and family medical history - these are apparently the most reliable indicators. I scored low and so didn't go on to the next stage.

This seems an admirable idea but clearly isn't done everywhere in the NHS. But where does practice freedom balance with central government interference or postcode lottery with oppressive bureaucracy? I’m sure you have a view!

Joe Manchin, the current governor of West Virginia, had a piece in his State of the State speech about preventative health care. He's trying to set up a system whereby people can sign up for something like $1/day to an insurance that would allow them access to check ups, etc. as a way of reducing health costs. The theory being that if you can nip something in the bud, it's a lot cheaper for all concerned. Given the costs of health care for the large numbers of uninsured in the States, it seems like a step in the right direction.

Anyhow, you can read a bit more about it in his column at: http://www.wvgov.org/FullColumn.cfm?id=281