David Cameron: What do you Think of the Show So Far Then? 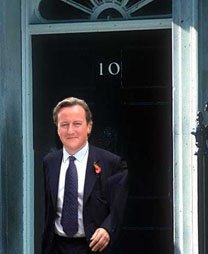 This evening's Newsnight on BBC2 has an extended analaysis of how David Cameron has done in his first 45 days. They're looking at the ConservativeHome Blog for feedback from Conservatives on what they think. This is what I have just posted...

"There's no doubt that David Cameron's impact in his first 45 days has been immense, not just on the Conservative Party but the wider voting public. His biggest achievement has been to add some humanity to the Party and to start the process by which we can appeal to those millions of people who we lost in 1997. Many have reservations about some of his more apparently liberal policies, but his strategy is 100% correct. The big challenge he faces now is to keep the Right on board while developing policies which on the face of it look as if they are on the left. This is the big tent which the Conservative Party needs to build if there is to be a coalition of interests wide enough to win an outright victory. Cameron has changed the political landscape and is setting an agenda. Since when was one able to say that about a Conservative leader? And I say that as someone who wanted a very different outcome to the leadership election. As some of you will know, I worked as David Davis's Chief of Staff until the end of the year. But credit where credit is due. Those of us who may have been disappointed on December 6th ought to have had our spirits raised by how far we have come in such a short time."

And what do you think, dear reader?
Posted by Iain Dale at 8:59 pm

Like so many others, I just don't know what to think. Does he mean all the left wing stuff, or is he telling porkies to get elected?

Is your nose brown?

The momentum has been with DC since his leadership speech - and he has been absolutely brilliant at keeping that momentum going. The leadership process pushed us Tories back into the limelight - more so than even the during the General Election - and its been positive coverage. The other two parties look old fashioned and out of date.

This post gives you an idea of how sincere he is: http://leongreen.wordpress.com/2006/01/17/are-the-tories-the-new-greens/

I think any new leader has momentum though Cameron has a better chance of sustaining it than most. Most crucially Cameron's support is coming from areas typically outwith the party - students who are enthused about him and ethnic minorities. For the first time in a long while the Conservatives feel inclusive; this is obviously unfair and faintly ridiculous when you think about it - Eton boy helps poor feel part of party? But however he's achieved it he has made the Conservatives feel electable again.

I think though it won't sustain quite as well as some Tories hope it will - you have a new Lib Dem and Labour leader on the horizon. Cameron's best hope is to lay out his case as a government in waiting and hope that Brown's reputation continues to slide, and that the Lib Dems elect a suitably different leader to pull Labour voters away from Brown. IMHO, obviously.

Like others I have been a bit disappointed with some of Camerons pronouncements,particularly on Grammar Scools and the A list which is a terrible idea.
BUT his success in the polls in such a short time has been amazing and it is the duty of a leader of the opposition to win.If he does that he will be forgiven.

I get the distinct feeling that the Tories have elected Rory Bremner as Leader... except Rory's impression of Blair is better and he's not so pompous with it.

Can't disagree. Cameron has already despatched one fellow party leader and with luck he'll make it two this year.

Anonymous - if Iain was trying to talk up Cameron when it patently wasn't true, I think we could accuse him of brown-nosing/trying to get back on the candidates list. As it is, his assessment is shared by most objective commentators.

But no doubt you'll accuse me of brown-nosing now...

David Cameron: Iron fist under a velvet glove. I'm to the Right of the party and, despite some flutters, am totally content with DC's start.

As I have said before, however, the big test will be not in the shire district elections (like Norfolk!) but in places like Wakefield. We had 20 seats when Thatcher won. We have 10 now.

May should be the perfect barometer.

Toffee-nosed poseur with no principles.