Mark Oaten - Who's Next to Fall in the LibDem Scandal Stakes? 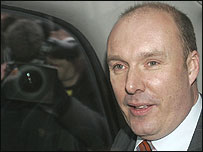 Imagine how Mark Oaten must have felt when he opened his eyes this morning before you rush to judge him too quickly. More importantly, imagine how his wife felt. Yes, this is a political scandal of the first order, but more immediately it's a human tragedy. The TV pundits have already been hard at it, some saying they can't understand what all the fuss is about and others asking how on earth he felt he could stand for the leadership of the Party when he must have known this might emerge. Ann Leslie on SKY speculated about the thirst for danger and she's probably nearest the mark. I just don't buy Helena Kennedy's argument on Sunday AM that this has nothing to do with anyone but Oaten and his family. But nor do I think he deserves to be ripped to shreads.

Following on from Kennedy's alcoholism, yesterday's revelations about Lord McNally and now Mark Oaten, there is now undoubtedly an appetite in the media for more LibDem scandals. So if I were someone in a prominent position in the Party and I knew I had some skeletons, I'd certainly be feeling a little nervous this morning. Guido speculates that on this basis the betting markets are shifting from Simon Hughes to Chris Huhne (who, incidentally, put in another good performance on Sunday AM). I'm not sure about this. But remember what the media were like in the 1990s in the infamous Back to Basics episode when the media exposed one supposed scandal after another. It culminated in the rather ridiculous resignation of Tory MP Hartley Booth who had written a poem to his researcher. He hadn't even touched her, yet he was forced to resign as a lowly PPS. I know of one prominent LibDem (not a leadership contender) who may well have cause to be more nervous than others. But LibDem activist and assistant to LibDem Chairman Paul Holmes MP Alex Foster has a slightly more salubrious take on what might come next. On his excellent Blog (which I only discovered this morning) he says this...

Popbitch carried a Lib Dem quickie this week: "Which Lib Dem wannabe leader used to be a regular visitor to a brothel in Paddington where he used to pay girls to shit in their knickers for him, and would then put the dirty pants in his briefcase and take them home?" Given that those are girls, and the Oaten story is about a boy, maybe these words from Stephen Tall tonight "But I am left scratching my head in utter bewilderment that he could have considered standing for the leadership of the party - to succeed a man who was forced to resign because of personal problems - when this story was lingering in the shadows." are going to end up sounding prophetic by this time next week. What a sorry mess. There are skeletons hammering on the inside of closet doors tonight.

On the LDYS Forum, here's a couple of quotes from (apparent) LibDem supporters...

Having sent of my money to join the Liberal Democrats - purchased every single one of the LibDem campaign guides - I now find I have joined the party of SLEAZE! I wonder if Hughes will recycle his 'It's a Straight Choice' slogan from his clash with Tatchel?

Well well well, I said in another forum last week that "Oaten has the charisma of an IT manager from Daventry". Obviously the rent boy didn't agree with me! I don't think this will really affect Simon Hughes as long as he keeps his mouth shut and there's no allegations about his past (or present?).

I'm more than annoyed that Mark could have had the audacity put himself forward as a Leadership candidate with such a shameful skeleton in his cupboard. Least he has done the honourable thing and resigned from the front benches but that's not the point. After the wave of public feeling surrounding the departure of Charles Kennedy, I don't believe he has been thinking about the Party in anyway but rather more about his personal political ambition which has clouded his judgement. He can apologise all he likes but I'm not inclined to accept it and I don't feel others will be so forgiving either. Surely MP's can't be that naive and not realise the Party is in the public eye and the media will be digging for any dirt they can find on any of our Leadership candidates and front-benchers. My intuition tells me we can expect other revelations.
So before I get torrents of abuse from LibDems accusing me of stirring things up even more it's open season in LibDem Bloggery and I am only reporting what I read!

One interesting question posed on PoliticalBetting.com this morning was: "Had ‘they’ known of the unintended consequences would they still have knifed CK?" Answers on an email please...
Posted by Iain Dale at 10:53 am

You can't seriously believe, that the "(apparent) LibDem supporters" you quote from LDYS forum really are what they claim? If you read their other postings, you'll find out that they are mere internet trolls.

This stinks of a stitch-up. All of a sudden Oaten quits in the middle of the week and then this story comes out. (Unintentional pun there...) It's as if it were all planned in advance...

"one SUPPOSED scandal after another" That's a laugh!

There are some jitters from Lib Dem members but that's not really a surprise. The Lib Dems have such a clean record compared to the corruption and sleaze of Labour and the Tories. You have to accept these thing happen occasionally though, however hard you try. Everybody is human.

'Such a clean record'

Thorpe's links to anattempted murder case, Ashdown's adultery, Kennedy's alcoholism, Hughes and Bermondsey, Hemming and 26 others, Oaten and a shower of boys, Kennedy and the questionable donations...

Relative to their size, that's not a bad run.

hemming and 26 others - what that all about or am I missing something obvious?

Politics attracts a lot of people who believe they are cleverer than they actually are. Getting elected is largely down to presentation, your ability to make people think things about you that may not necessarily be true. Is it any surprise that the people best at this are those who have spent all or part of their lives with something to hide?

To be honest, the biggest disappointment, from a Lib Dem perspective, is that there was obviously not enough "quality control" over candidates. Allowing people with problems to rise to such positions was a mistake and, in private, that's going to have to be addressed. I think that a basically good political position has been undermined by personal failings.

I do have to say one thing though, I'm glad this is happening now and not 6 months before the next general election. Doubtless whoever takes over as leader is going to have a difficult job, but at least they'll have 3 or so years to do it.