ConservativeHome and Harry Phibbs on the Social Affairs Unit have both written very interesting pieces on the concept of being 'Right Wing', a term the BBC usually applies to anyone it considers a 'baddie'. Ming Campbell, in a rare public statement this week, decided to avoid talking about real political issues like education or health but instead launched an attack on David Cameron, calling him an 'unpleasant right winger'. I understand Sir Ming is recovering well from his fever and the hallucinations are gradually going away. Let's define what being 'right wing' actually means. Here are my Ten Different Ways to Spot a Right Winger... 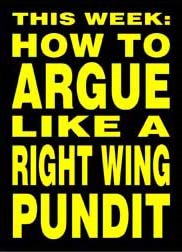 I'd love Sir Ming to tell me what's unpleasant about any of those. Surely a true Liberal would agree with at least 8 of the 10 points. We Conservatives have got to be very careful about this kindm of labelling. We need to reclaim the concept of being right wing as a positive, not a negative thing. We need to question media organisations who refer to the BNP as a far right Party. They're not. You look at their policies and they have far more in common with an authoritarian, State-Knows-Best far left policy platform. Put simply...

It's all very interesting this left/right distinction, but...

Why is sovereignty or love of country right wing? What about Tony Benn or Peter Shore?

Is Osoma bin Laden left or right? Or Mugabe?

If you persecute gays, but believe in socialism, are you left or right? Fidel Castro? The Pope? Left or right?

Is it the use of violence or force that makes you right wing? What about Lenin? Left or right?

Why does one never hear the term 'extreme left'?

I like animals, so I must be left wing...

Cranmer, I have some sympathy with what you say. I am not sure how relevant the traditional right/left labels are any more, but if the term 'right wing' is going to continue to be used in a perjorative way by people like Campbell and the media then those of us who are dubbed 'right wing' had better sit up and defend it. I would consdier myself to be a right winger, yet I have what would traditionally be perceived as left of centre views on some social issues. Right wing has traditionally meant 'authoritarian' and 'moralising' on social issues, yet today many people on the right take a very laisser view on social issues. Pigeon-holing has become much more difficult.

Surely you mean a right-winger believes taxes are currently too high? Believing taxes are always too high puts point 1 in contradiction with point 10. Similarly 2 should be the smallest possible government is the best, other wise you jeapordise the governments ability to fulfill its first duty (4) i.e. an MoD-less govt would be smaller. And i'd say Thatcherism, patriotism and and Euro-scepticism were forms of right-wingery, not constitutive of it, as a rule.

Not a pedant, just killing time...

If you are he from Genesis, I suggest you go to bed and kill some time doing what you are famed for (38:9).

How on earth can patriotism or Euro-sceptism be the preserve of the right wing? To assert that this is 'right' is to insult some of the world's most dedicated socialists.

How can one defend the rights of workers, the poor, or the oppressed, if you devolve the political tools, very means of aleviating their poverty, to an unaccountable and unelected authority?

You list could be accepted by both the BNP & Tony Blair (Brown couldn't go for 1 & 2.

I find the 2 dimensional political compass < http://www.politicalcompass.org/ > more useful (I score 3,2 which puts me half way between Friedman & Ghandi)

They are forms of right-wingery but not exclusively the preserve of the right. Obviously there's a Euro-sceptic left. It's not constitutive of left-wingery either.

This exchnage makes my point for me!

An excellent kit for identifying sound minds. Turn it around the other way - its also useful for those posing as Tories who are just social democrats with posh voices.

This is a very good point, I think if we are going to win back the 'moral high ground' we need to retake the term 'Liberal'. Of all the labels that have been misused politically over the last 100 years this has to be the worst. The title 'Liberal' is these days given to the most illiberal people and parties and those of us who truly are liberal are labelled as 'nasty right wingers'.

I agree with the point about the missuse of the term liberal above, and ive made a suprising post about that here;

Id also agree that the BNP is somewhat left wing economically, but it is a long way away from the fascism we now have to fight off in the guise of "nu labour". But then the BNP is left wing econimocally largely because it believes in the nation, and not the opposite, globaslisation.