Prescott: What Does the Public Have a Right to Know 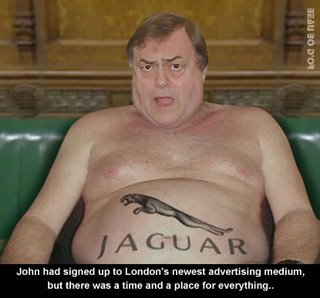 When it comes to sex scandals involving politicians, we should constantly ask ourselves why such things are of any relevance to the public. There are two questions which we need to ask, to determine whether such a scandal is of public relevance or not. Firstly, is there any whiff of hypocrisy on the part of the politician involved, and secondly, has the affair affected his or her ability to do their job? In John Prescott's case I would argue that he meets the criteria on both counts. The papers this morning have picked up on my Post yesterday about Prescott's 1996 speech to the Labour Conference, where he was hurling accusations at John Major about Tory sex scandals. The second point is more interesting. If a Minister has an affair with a civil servant, let alone one in their Private Office, it affects the management of the government department concerned. The affair, it seems, was an open secret in the Department and Prescott even took her to a ceremony commemorating the war dead accompanied also by his wife Pauline. If I was Mrs P, I would consider that to be the biggest insult of all. So in this case I feel public interest in the man who will now inevitably be known as Two Shags is entirely justified.

Another issue which has reared its head again is the role of the media. There are undoubtedly suspicions about the timing of this, as it diverted attention away from Charles Clarke's troubles. We'll never know whether this was coincidence or it was planned. Kevin Maguire on the Mirror has been remarkably coy (not something he's normally guilty of) on this in his various media interviews. Guido has already had a go at Nick Robinson for describing news of the affair as "a bombshell". The fact is, everyone in Westminster knew what Prescott was up to. As one of the Comments on Guido's site says: "I wasn't even the lowliest research assistant - I was an even lowlier intern, who'd been there about a week, when I heard the story." So yet again there has been a conspiracy of silence on the part of the Westminster Lobby, a conspiracy which was certianly not much in evidence during the Tory years. Some of you may remember the case of poor Hartley Booth who was forced to resign for sending his researcher a love poem - he hadn't even done the dirty deed! Yet everyone in Westminster knows of Prescott's affair with a fellow Minister who has rapidly shot up the greasy pole (if you'll pardon the expression) after receving his patronage, but do we read about that in our newspapers this morning? Do we hell. Do we read about the serial Ugandan exploits of another senior Cabinet Minister, which are known to even the most junior journalist in Westminster? No. There are some serious double standards here. If a Tory or a LibDem is fair game to the media on the grounds of hypocrisy or public interest then surely the same rules should apply to government ministers. The reason they do not is because any journalist who published such a story would immediately find that their sources within New Labour mysteriously evaporated. So they remain complicit in an unspoken conspiracy. It stinks.
Posted by Iain Dale at 10:35 am

why are theri names not published in the blogosphere

Any chance of some subtle hints about the Ugandan discussions?

Come on Iain, aren't you just setting up a straw man here? The only Ugandan discussions the government undertakes are a matter for the Foreign office.

It could all be a lefty conspiracy... or it could be there's no proof, and the media is aware of the laws of libel in this country.

Given you, a right-of-centre commentator, are refusing to name the 'senior cabinet minister', perhaps it might be the latter?

a rapid ascension to ministerial status? I can think aof few canddiates there - unless you'r e talking an Oaten-eqsue scandal in which case... sweet jesus!

I think this kind of piece is now known as 'a Toynbee': ie urging others to do something you're not prepared to do yourself.

Weren't you asking earlier for suggestions for content in your Indy on Sunday column?

Seems like you have a perfect opportunity to put this perceived injustice right, doesn't it? And if not, why not?

I feel very proud of myself that I've managed to deduce the second Prescott affair from the broad hints dropped here and elsewhere. The last thing I want is for it to become public knowledge - let me feel like someone in the know for just a little longer.... please.

As for Uganda, I was there in February; didn't see any Labour MInisters.

Rigger has it right - if the lobby won't publish then the Blogosphere must.

Do your duty Dale - England expects.

They have a point, Iain. If it was simply a case of losing New Labour sources, you wouldn't have hesitated for a moment. You have considerably less to lose than the Lobby hacks.
Don't forget, the lady in question probably enjoys the protection of being (politically) close to Brown and thus, with his imminent take over, they really don't want to go there.

I agree - you should publish the name and be damned

What if-the person concerned is moved in a quick re-shuffle and therefore the story loses "impact"
We've reached deckchairs on Titanic stage-what harm can it do------------------???