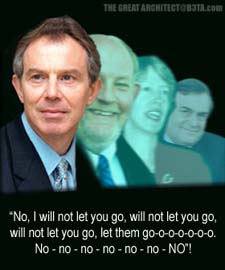 A YouGov poll to be published in tomorrow's Sunday Times shows that public opinion has swung sharply against John Prescott. But the poll shows that the public are even keener for Charles Clarke and Patricia Hewitt to lose their jobs.

Over half (57%) of those surveyed by YouGov for the Sunday Times in the immediate wake of Labour's "Black Wednesday'' said the party was"sleazy and incompetent''. And Prime Minister Tony Blair's personal rating has slipped to its lowest level since he took over as its leader, with 64% saying he was doing badly and just 33% that he was doing well. On the eve of fresh revelations of Mr Prescott's infidelity 48% sayMr Blair should sack him, including nearly a quarter of Labour supporters, while 31% think he should be kept on. Earlier polls had suggested he had the public's backing to stay. However, some of that desire to see him quit could reflect opinions of his political abilities, with 52% agreeing he was "a buffoon who should never have made it to high office" . Just 9% thought he had done a good job as deputy PM. Even more people want to see the Home Secretary sacked over the release of foreign prisoners - 53% backing him for the axe and 21% wanting him to stay in post. A huge majority - 89% - said the issue showed "alarming incompetence'' with 72% dubbing the Government's overall performance on crime and immigration "generally incompetent". Health Secretary Patricia Hewitt - who was forced to abandon aspeech to nurses because of the volume of heckling and booing - is wanted out by 51% of voters, and supported by 19%. That reflects distrust of her claim the NHS had had its best ever year - 72% saying she was wrong to say that and only 7% agreeing. More than twice as many people (62%) believe the NHS is doing badly as doing well (30%). The poll also revealed signs that smaller parties may do well in Thursday's general election. All three main parties ratings are down on the last poll in March -Labour and the Tories each dropping three points to 32% and 35% and the Liberal Democrats down one at 18%. "Others'' were up from 8% to 15%.
Posted by Iain Dale at 7:27 pm

So now its official, 36% of the population are either on Blairs payroll or just plain thick(or both)

Frankly, this is bad news for Tony Blair, about as bad as can be expected for the Labour Party and an absolute disaster for David Cameron. Do you think the Labour Party could possibly have a worse week between now and the next election? And yet Cameron's reward is to see his party fall in the polls.

The Tories suffer from the present situation, by the 'plague on all your houses' notion.

Government is now seen as management.... And the difference between Labour and Cons as that of technique.

Interesting that the traditional party of protest, the LibDems have not sucked up the resentment.

Have the media and the Hodge woman fed the BNP widespread support?