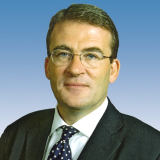 So far there has been little speculation over the future of the junior Home Office Ministers. There are three who could reasonably be expected to depart along with Charles Clarke, if indeed he does go in the end. Indeed, it would not be unreasonable to know if any of them have offered their resignations to Tony Blair before now. The three in question are Immigration Minister Tony McNulty (pic), Probation minister Fiona MacTaggart and Paul Goggins, who undertook Tony McNulty's role up until the last election. Cheeky chipmunk Hazel Blears looks as if she is safe. I don't like to stick the knife into Tony McNulty as he's a friend of mine, but being totally objective it's difficult to see how he could survive a Clarke resignation. Some had been tipping him for Cabinet promotion due to his combative style, but that looks a distant memory now.
Posted by Iain Dale at 9:31 am

Surely it was Des Browne, now Chief Secretary to HM Treaury, who was Minister of State for Immigration and Citizenship before Tony McNulty ?

How come Tony McNulty did not resign over the "sex for passports" scandal ?

Tony McNulty's "combative style" is not what the public should expect from a Cabinet Minister.

He displayed this aggressive "style without substance" during the passage of the Identity Cards Bill, which only served to make the Home Office look inept, as he could not refute any of the reasoned arguments of principle, or about the practicalities and cost of the particular scheme which he is championing.

He shamefully used Parliamentary privilige, and the vast public relations spin resources of the Home Office, to make personal attacks on the reputation of Simon Davies and on that of the London School of Economics Identity Project Report team.

A friend of yours, Iain?
I'm shocked.
By their friends ye shall know them.

From what i've seen of his performance, all I can say is that the man is a T-H-U-G.

He is uncouth & offensive, & his answer to any Conservative who questions the manner in which immigration in this country is handled is to call us racist.

I can't wait till he's out of government and out of parliament.

I believe the politics are similar as well.