Belinda Oaten Invites Us Into Her Gorgeous Home 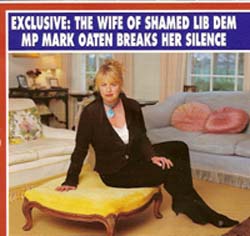 For an ex-PR man, Mark Oaten is not very smart. His wife had said "I will not be giving any interviews", yet today's issue of Hello Magazine contains an interview with Belinda Oaten, which is obviously the first stage in the Oaten rehabilitation process. Bad mistake. A period of silence and hard work would have done far more than this sort of Mellor-esque interview. But seeing as she's gone public, here are a few selected quotes...

"It was a normal Saturday morning. I don't even know what the date was - I'm still too scared to look and find out just how much time has gone past. The evening before, Mark had come home in really good form, 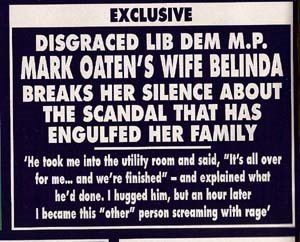 delighted to have quit the LibDem leadership race. I was feeling upbeat because I thought 'Great, that's a huge pressure off and perhaps we can now look towards doing the other things in our life... I noticed two cars outside the house...Mark went out to look while I looked out of the window...He came back into the house. He looked very white and said 'I've got to talk to you'. I remember him explaining it to me in the utility room. 'It's over for me, it's finished, we're finished'. I couldn't grasp what he was saying. I remember hugging him and saying 'it's OK, we'll get through this' and then in a sort of autopilot sort of way carried on making eggy bread, which the girls always like on Saturdays. I felt totally numb. There was disbelief and horror. Then I began to think, God, this is actually something hugely bad. I felt like I'd been capitulated into a living nightmare. It wasn't until an hour later that a huge wall of pain hit and that's when I became this other person, screaming with rage and hurt... I could never have seen it coming...I always thought we were soulmates and we had a strong physical relationship... I threw my rings at him. I don't know where they are. I assume Mark's got them. I'd lost all respect for him... I think what he said in his statement that there was a flaw in his character was understated...It was more than an error of judgement...For weeks I'd ask him, literally every hour, are you going to do this again?...We've been doing quite intensive marriage therapy for the past two months...It was Mark's idea to go...As yet our minds aren't made up as to how it's going to go between us...The presure has been intolerable, I never intended to speak but I never realised just how much pressure my family would be put under. I am hoping that after this I will be able to get on with my life."

It was a long interview and these are very much edited "high"lights. She's obviously a very nice, caring woman who can't quite believe she's been put through this nightmare. If her husband wasn't in tears after reading the interview he should have been. Forget having put her through hell in the first place, encouraging her to do this interview was a terrible error.
Posted by Iain Dale at 4:16 pm

She's silly doing this but equally I'd rather we didn't all make it worse by gloating.

I'm not gloating - but if it's in the public domain surely one is allowed to comment on it! I feel very sorry for her.

the popes under pants said...

nothing wrong with a good gloat

Had Mark Oaten been a Conservative, the Lib Dems would have been screaming blue murder (well, they were in the 90's for far less.)

Does the fact that most Conservatives are keeping reasonably quiet about this tell you something about the differences between Lib Dem and Conservative supporters? I think it does, and just for the smart-alecy Lib Dems that might think of chirping up with an anti-Conservative comment - don't bother - what Mark Oaten did with rent boys and put his wife through was sick and twisted, and reflects extremely poorly on your party.

Sorry to sound cynical, but did she get paid for this article?

I presume there was no attempt to question Belinda about her thoughts on the nature of the activities Mark Oaten paid money for?

This wasn't an 'affair' but some disturbed behaviour by somebody who needs some major help - this is a huge mistake for the Oatens if either of them are actually interested in their own future as a family, but this sort of thing tells me there is a lot less to them than I would have thought.

I see she describes hitting him several times. I'm pretty sure there's a quote somwhere from a Lib Dem saying that domestic violence should not be tolerated and that provocation is no excuse.

I look forward to the calls for an example to be made.

Sorry Iain, I didn't mean to make it sound as if I thought you were. Just wanted to pre-empt the possible direction of things...!

mark oaten,if he was a gent would have kept a lid on this.the fact that he's willing to put his family through the mill on this to get his career going speaks volumes about him as a person.