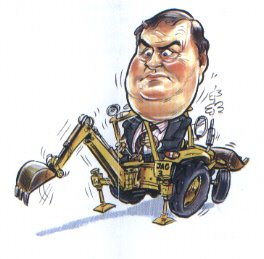 Thank you to the reader who sent me details of John Prescott's 1996 Labour Conference speech. The stench of hyprocrisy is readily apparent. If anyone else has some appropriate Prescott quotes, so let me know and I'll add them to this post.

"They are up to their necks in sleaze. The best slogan he could think up for their conference next week is Life's better under the Tories. Sounds to me like one of Steven Norris's chat up lines. Can you believe that this lot is in charge? Not for long, eh? Then after 17 years of this Tory government, they have the audacity to talk about morality. Did you hear John Major on the Today programme? - calling for ethics to come back into the political debate? I'm told some Tory MPs think ethics is a county near Middlesex. It's a bit hard to take: John Major - ethics man. The Tories have redefined unemployment they have redefined poverty. Now they want to redefine morality. For too many Tories, morality means not getting caught.Morality is measured in more than just money. It's about right and wrong. We are a party of principle. We will earn the trust of the British people. We've had enough lies. Enough sleaze."
Posted by Iain Dale at 10:38 am

Didn't he boast years ago that he was always at least one jump ahead of the opposition?

It's like a bad dream... just like watching the Sex Lives of the Potato Men. Did you see the survey in yesterday's Guardian? Men are more aggressive towards super-masculine types when their woman is in her fertile stage. With beautiful symmetry, one recalls Prescott's pugillist past and wonders who he was knocking off on the side even then

Brings a whole new meaning to a diary session!

See some pics of him
http://postmanpatel.blogspot.com/2006/05/prescott-amazing-pictures.html

Ian, I hope you don't mind but I have used the quote on my own blog. We come at things from different perspectives I think but sleaze is sleaze whatever colour you paint it.

John Prescott is proof the 11+ system worked, he failed!

John Prescott was never a merchant seaman, as he claims, he was simply an on board waiter and as for him ever having been a boxer there is no record of him ever having had a contest either as an amateur or professional. He was into spin before the word became common just as he has always been "up to his neck in sleaze."