Prescott Very Unwise to go to the PCC 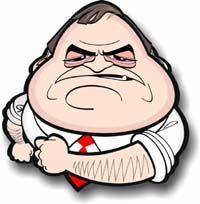 Before I start, just a quick advert for my Diary column in the Independent on Sunday - I hope you've all bought your copy today!

So John Prescott has, according to the Sunday newspapers, come out fighting. Possibly not the wisest word to use with regard to Prezza. He is threatening to take the Mail on Sunday to the Press Compaints Commission. I hardly think this would be his wisest course of action. I can't actually think what grounds he would have for doing so. He is said to be disputing some of what Tracey Temple says, but doesn't say what. Perhaps if he and his Department had offered her the advice and protection she had understandably sought, things might have turned out rather differently. I haven't read her account in the Mail on Sunday yet (I need to have my breakfast first!) but it appears she hasn't dished the dirt on what Prescott thinks of his Cabinet colleagues, as I had been told last night she was going to. I wonder if this has been saved up for the Daily Mail or even next week's Mail on Sunday. If Blair's reshuffle is going to happen on Monday week, it would be understandable if the MoS had held that particualr nugget over for a week. The big question now, is what does Tracey do next? Does she rake in a bit more money from the likes of Richard & Judy or Hello Magazine, or does she call it quits? Max Clifford was on SKy News earlier and clearly had no idea what the answer to that question was.No doubt he'll be encouraging her to go further to get another 20% commission.

The Sunday Times has a front page article from a former Labour Party worker alleging he sexually harrassed her on several occasions. She describes Prescott as a "serial groper". In some ways this sort of allegation can be more damaging than having an affair, especially in politically correct Labour Party circles. All the papers refer to rumours of other affairs but none of them name names. One paper mentions a "female junior minister" but that's as far as they go. At least three blogs have now named the minister in question, yet the national media, with all their financial resources, have backed off from doing so. I wonder for how much longer.
Posted by Iain Dale at 10:50 am

Isn't the Chairman of the PCC the former diplomat Christopher Meyer -who was treated disgracefully by the Government? Wasn't he referred to by John Prescott as a "red socked fop"?

Plus, what are the grounds for Prescott's "complaint" - printing things he doesn't like?

I confess to reading the entire article in the MoS - how can the sleazy, disgusting Prescott possibly remain in office?

Mind, how can useless incompetant Charles Clarke remain either?

Prescott attacking his colleagues would probably be the final straw, Iain. After your predictions of yesterday I was disappointed not to see them appear today but, yes, you're right, there's always tmrw's papers...