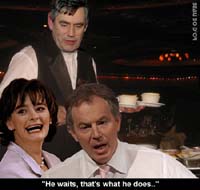 In the year or so before they so brutally despatched Margaret Thatcher, Tory backbenchers were asking themselves one question: How best will I hold my seat at the next election? They concluded that the best answer to that question was to get rid of the woman who had won them three elections. Fifteen years on history is about to repeat itself. But there is one difference - Tony Blair has already announced he's going, but seems to be wanting to hang on to the bitter end. If, as I expect, John Prescott and Charles Clarke are both forced to resign within the next seven days, and Labour does badly in Thursday's local elections, Labour backbenchers will become even more restless than they have been already. Their thought process will be as follows: It won't be Tony Blair who has to defend the Labour record on the doorsteps, it'll be the poor bloody cannon-fodder like me. Therefore, the only way out of this is to set out on a fresh new path, and set out as soon as possible. But they have a problem. As far as I can see, it is almost impossible for them to ditch Tony Blair outright. They don't have the equivalent of the Tories' men in grey suits, and even if they did I suspect the Dear Leader would take no notice of them. So much will depend on Gordon Brown's willingness to go for the kill. So far he's been remarkably unwilling to do anything to undermine Tony Blair in public- it's all been by background whispers and media spin. Journalists reckon their relationship is going through one of its periodic rocky patches, with the two barely able to speak to each other. But consider this for a scenario: Things proceed as I have predicted over the last seven days and Tony Blair starts thinking about a wide ranging reshuffle. Gordon Brown decides to go for broke and tells Tony Blair that unless he publicly announces the date of his departure he can no longer continue to serve in his Government. What would the shakeout from that be? Gordon, your time for decision is rapidly approaching. You failed to deliver to your publisher a book called "Courage". Now's the time for you to display some. Otherwise you will end up being another Roy Jenkins or Michael Portillo - men who might well have got the top job if only thheir courage had not failed them at the last minute. Hat-tip to Beau Bo D'Or for graphic
Posted by Iain Dale at 12:07 pm

The problem for Labour, however, is that polls consistently show they would do even worse under Brown than Blair!

So there isn’t much incentive for wanting dear Gordon in anytime soon either, what’s more its doubtful weather he’d be different, in any substantive way, to Blair.

Labour best bet is to plum for someone who’s clean when it comes to incompetence and sleaze while at the same time also not closely identified with the Blair-Brown feud… my suggestion would either be Alan Johnson or Hillary Benn – but that wont stop it being a Brown leadership in all likelihood.

All this Blair /Brown nonsense makes me laugh, Brown already runs the country nad has done since 1997, Blair like prescott is just given some toys to play with and given some ego massage, Bbrown is a spinless gimp who, knowing he has plenty of enemies, would rather keep the status quo

Despite all his present and past problems, TB still seems to be admired, liked even by most people even amongst Tories. Just in case Labour MPs haven't yet realised the fact, the Dour One simply doesn't cut it, apart from with stalwarts in his own party.

Stating the obvious, I know, but the key to winning elections, and TB's great strengh, is to persuade enough people to vote for you who would otherwise not be inclined to do so - on this count Brown will be a disaster for Labour.

The result would be simple: Gordon would, like Nye Bevan before him, go to the backbenches and the government would fall apart. The beneficaries of all this would not be team GB, but the Tories and the effect would be crush the Labour Party for 20 years - all of these are the reasons why this won't happen.

The problem for you Tories is that you are mistaking Westland - ie a serious but momentary crisis - for Black Wednesday - ie a moment that destroys the credibility of the government for ever.

This is Blair's Westland moment but already the worst is over - everyone knows the results on Thursday will be bad, everyone knows JP cannot keep it in his trousers. Does that mean people have been shocked by the threat of a £200 a month rise in their mortgages - it doesn't even come near.

Close, but no cigar.

In your brilliant pic, why is TB turning his back on the waiter? Perhaps he's squirming with embarrassment as Cherie prepares to leave one of her Cliff Richard-style tips.

Cherie is the sort who, scoops up the tips left by other guests and then takes them for herself,people like that really do exist.

Iain, the difference between now and the fall of the House of Thatcher is one of timing. In 1990 Tory backbenchers had good cause to fear. They were no more than 2 years away from the next election and were miles behind in the opinion polls. Labour backbenchers have got anything up to four more years, and they know Blair is going anyway, and the opinion polls do not spell disaster... so there is not the same sense of fear or urgency. So, their advice to you would be, relax, learn to live with it.

Councillors, particularly those up next week, may well think somewhat differently, however.

Blair will never stand down and Brown doesn't have what it takes to get rid of him. I still think TB will lead te Labour party into the next election and hope for a coalition with the LDs who wouldn't be able to resist a couple of cabinet eats.

gotta say that I disagree that Blair is better at winning elections? who remembers the failure that Milburn was in 2005? If he and Blair had carried on without Brown, we'd be the oppositition by now.