Another LibDem PPC Defects to the Tories 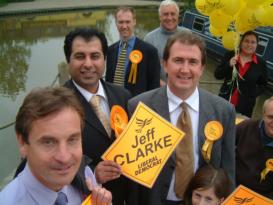 A Liberal Democrat parliamentary candidate has defected to the Conservatives after David Cameron's decision to position his party to the centre ground and pitch for the green vote. Jeff Clarke, who fought Wirral West for the Liberal Democrats at the general election, said: "The arrival of David Cameron at the helm of the Tory party has precipitated a shift in the direction and political atmosphere within the party. Politics is suddenly dynamic and interesting again. Crucially, it now offers - arguably for the first time since 1997 - the only potentially achievable opportunity for 'regime change' at the next election. "That possibility would gather more credence if the joined-up forces of compassionate conservatism and genuine liberal democracy were to combine to ensure the departure of our current presidential, autocratic and authoritarian government." Mr Clarke is a barrister in Liverpool and a Liberal Democrat member of Chester City Council.

I am already bracing myself for the torrent of posts from LibDems explaining what a nonentity Mr Clarke is and how they had never heard of him. Welcome aboard, Jeff!
Posted by Iain Dale at 6:37 pm

Does the name Robbie Rowantree mean anything to you Iain?

Inamicus, Yup, shame to lose him. I had heard of him (!) but know nothing about him. I think the conduct of the Moray by election campaign was the last straw for him.

This is the third time he's swapped sides though in five years. Obviously not too fussy a lot the Tories, like us...:)

I hear that he stood for us in a couple of Welsh seats in 1998 and then sometime after the Eddisbury bye-election he joined the Tories and then rejoined us in 2004 and stood in Chester City Council elections, and now this.

Great!
Glacier mints all round!

Do you mean Robbie "Off in the huff headchopper because I didn't get a good place on the party lists" Rowantree?

If he is an example of the Lib Dems "liberalism" thank God he's left.

"Last week, Robbie Rowantree, once billed as a Tory high-flier, withdrew as candidate for Moray, one of the party’s more promising seats. The official reason offered by the party was an illness in the family, but insiders said he was unhappy with his fourth place on the Highlands and Islands list."

"I don’t have a problem with the death penalty...I would be glad to wield the headman’s axe."

"Because of the liberalisation of society lots of people find the boundaries hard to find...People don’t know the difference between right and wrong."

I have heard of him. He applied for Montgomery at the time that Lembit Opik won it but was not shortlisted. Clearly, the Tories are less fussy about who they offer winnable seats to.

Does he hail from Sutherland?

Robbie Rowantree joined the Lib Dems before Margaret Ewing died. Nothing to do with the by-election.

The quote suggests he believes the fact that 64% of the voters voted against Labour means they ought to be removed. That being the case it would be interesting to see what prompted him to move to a party that promotes an electoral system that makes this inevitable.

I have said before that the LDs are missing a trick by not pushing hard on PR. It is impossible for Cameron to look reformist, nice or even sensible while defending an obviously corrupt electoral system that prevents exactly this sort of broad concensus (& no longer even helps the Tories).