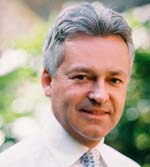 From my Independent on Sunday diary...

Whatever next. Just when you thought celebrity TV couldn’t get any lower I bring news to prove the opposite. Coming to a TV screen near you in early July is Celebrity Show Jumping. Even more astonishingly it’s not the product of some low grade digital TV channel, but BBC1. Yes, dear licence payer – it’s you that will be picking up Endemol’s hefty production bill. I can also exclusively reveal that the creators of this bizarre programme, Endemol, have invited Tory frontbencher Alan Duncan to take part. Hunky Dunky’s last foray into the world of reality TV was to go camping with recalcitrant teenagers. It met with mixed reviews and saw Duncan break down in tears at one point. Taking part in the programme would mean taking a week out of Parliament, something Duncan is rather wary of. Having seen the reaction of George Galloway’s constituents to his sojourn in the Big Brother House, who can blame him?
Posted by Iain Dale at 1:38 pm

Is he going to be the one who is riding or the one being ridden?

I thought this was all in aid for Children in Need though?

If it's for Children in Need (are you sure it's not for Sport Relief another BBC charity) and it's only a week Duncan should definitely do it. Julia Goldsworthy on balance got quite good press out of The Games. For instance Chris Moyles talks about reality TV a lot on his Radio 1 show - a huge audience which will on the whole be hard for Conservatives to even be noticed by. (Dereck on BB was treated fairly)

CBB is a bit sleazy because of the 24 hour thing all on camera no contact with the public element. But this sounds more like Strictly Come Dancing which is entirely different. Plus as Duncan is gay it helps move the still sizeable number of people away from thinking it is impossible to be gay and tory.