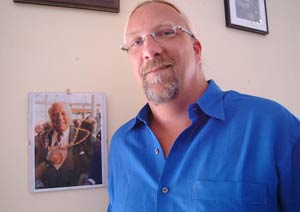 Things have been so exciting today that I have only just got round to looking at today's Times. I'm glad I did so. On page two there is a very interesting article on Michael Brown, the man who donated £2.4 million to the LibDem and has just been arrested on 53 charges of fraud. Click HERE to read the full article. Here are a few tasters from the article.

Mr Brown (pictured) is accused of forging documents involving purported trading of $1 billion (£560 million) on financial markets through his money management arm, 5th Avenue Partners Ltd.
If it is shown that the company was not “carrying on business” when the gift was accepted, the Lib Dems may have to surrender the donation, possibly forcing the party into bankruptcy. The alleged offences include claims of false accounting and forgery relating to the period last spring when the company was handing over large sums to the Lib Dems. In one charge, Mr Brown is accused of forging papers to show that he made $2 million (£1 million) profit from trades on May 5, general election day, when the Lib Dems were winning an unprecedented 62 seats. Mr Brown, an expatriate Scot, who was arrested at his home in Majorca, is also accused of lying to get a new British passport by pretending that he had accidentally put his own through a washing machine in Spain. Mr Brown transformed the electoral fortunes of the Lib Dems when he appeared from nowhere and agreed to fund them. He was barred by election law from giving a donation as an individual because he is not on the British electoral roll. Instead, the Lib Dems declared the gifts to the Electoral Commission, which polices donations, in the name of the newly created, London-based 5th Avenue Partners Ltd. The company also provided Charles Kennedy, as party leader, with £30,000 of free flights on a corporate jet during the campaign. By law, political donations may be accepted only from British companies that “carry on business”. If the commission suspects that 5th Avenue Partners Ltd was not trading when it financed the Lib Dems, it can ask prosecutors to investigate and confiscate the money. The Lib Dems would face ruin because they have already spent the gifts on election posters and advertising. The party lives on modest reserves.

Sir Ming Campbell said in the autumn that he would take more money from the controversial benefactor. Does he still stand by that? I hope those LibDems who pooh-poohed my speculation on Friday that the LibDems might be forced to hand the money back are now taking the possibility a lot more seriously.
Posted by Iain Dale at 5:09 pm

I accept that if they had to re-pay the money today it would bankrupt them. But what is the likely timescale here? Fraud trials take a long time to happen. Would the re-payment have to occur before or after?

I doubt they'll go bankrupt - there will always be some moron around to bail them out. However, I will have a good laugh about this. Ha Ha HA!

No, we're not. As under PPERA the party's legal advice as I understand it is that they cannot.

Further - that doesn't seem to be the same Times article that was on about lots of elleged offences relating to a period from late summer to Christmas and mostly around November. Which isn't spring.

For what it's worth I understand the legal advice surrounds something a bit like election petitions - if the donation is not challenged within x days of a particular date (presumably when it is declared, quarterly, under PPERA) then it may be censured but not recovered, or somtheing along those lines.

So what you're are saying is that even if this money turns out to be dishonestly acquired the LibDems will still keep it because of a technicality?

Whatever happened to the squeaky clean LibDems and don't they think the real owners should be reimbursed?

Not correct. A donation from an impermissible donor must not be accepted by a party and must be returned. If the donation is not returned within 30 days, the party and the treasurer are both guilty of an offence. If the Lib Dems claim that they didn't know that the donation was impermissible, that is not a defence. The donation would be impermissible if the donating company was not engaged in a business in the UK. It is theuir responsibility to check that out properly, just as for example banks have to run money laundering checks. The Lib Dems failed to check out Michael Brown and were happy to take his money. They deserve any punishment that comes their way over this.