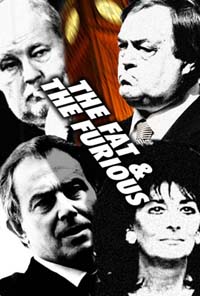 This is explosive stuff...

In an interview for the News of the World tomorrow Tony Blair will say there are "no excuses'' for the mistaken release of hundreds of foreign prisoners. He refused to guarantee Charles Clarke would survive the fall-out. He said that the future of the Home Secretary"depends on what happens'' as efforts continue to track down the criminals and trace any reoffending. Mr Blair said he had had no hesitation in refusing Mr Clarke's offer to resign over the affair because the Home Secretary had been trying to sort it out. But asked whether his view would change if one of those released committed a serious crime, he said: "I don't think I'm going to speculate. It depends on what happens, what the reasons are.'' Asked for his initial reaction to being told about the releases, Mr Blair said: "The reaction you'd expect - pretty angry about it". Asked if he had not hesitated to keep Mr Clarke in place, he said:"Yes, because my point is: in the time he's been Home Secretary has he been trying to sort it out? Actually he has.'' It was a "fair point'' to ask at what point a politician became responsible, he conceded. "But he has been acting on it. That's where I disagree with people who say he's ignored it. He hasn't.'' Hattip for graphic to Beau Bo D'Or
Posted by Iain Dale at 7:47 pm

"He told said that the future of the Home Secretary"depends on what happens'' as efforts continue to track down the criminals and trace any reoffending".

Or to translate: "If Charlie makes my personal positionany more uncomfortable than it already is, his ass is toast".

Who on earth can blair find to replace him?
Gordon ? (interesting)
Blunkett returns?
Ii say a milliband or Hilary Bbenn

I may just have a bet on Milliband, Marxist toecap buffer, lives in an agreeable flat, no skeletons in his closet, Ttony likes him,Im reaching for my credit card right now.

Benns promotion to a great office of state would create in time a credible non brown leadership contender. Surely what tony wants.

John 'Dope' Reid, I thought was the hot tip?

Is anyone going to ask a PQ on the added costs to the taxpayer of finding all the "missing" non deportees?

Given the dangers posed to society by Clarke's failure should we not have a televised debate between Gov and HMO.
For the Government-Charles Clarke
For Her Maj Opp -David Davis
PS-If Clarke won't his boss could always stand in!