EXCLUSIVE: The Questions the Met Should Put to Labour's Head of High Value Finance & Endorsements 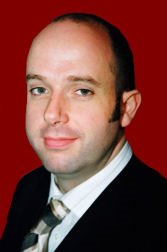 On Sunday, the Mail on Sunday published an abbreviated version of the now deleted blog of Nick Bowes (left). Nick Bowes was Head of High Value Fund Raising and Endorsements until he resigned shortly after the General Election. I have now secured the full text of his blog entries referring to the Cash for Peerages scandal and I publish them here in full for the first time. It seems to me that Mr Bowes could have some very useful information for Inspector John Yates of the Metropolitan Police. In particular, the following questions would seem to be particular relevance. The number of the question refers to the number in the text...

1. In your role as Head of High Value Fundraising, you must have got to know Lord Levy quite well. What did he do to cause you to describe him as having "grimy hands"?
2. What caused you to write that Chai Patel was "demanding" a peerage?
3. In your blog entry of March 21 you write: "I have been minded to write an explosive entry about millionaire loans to the Labour Party for a while now - one which could have the diary pieces wetting themselves with glee". What would you have written in that entry?
4. You write on March 21 "Number Ten is clearly running a party within a party". What did you mean by that?
5. You write that Blair, Levy, McCartney and Carter were all "complicit in the scam". What did you mean by that?
6. You write of the lendors: "I know all the individuals on a personal level and there are plenty of anecdotes on them I could spill". Go ahead and spill.
7. You say the PM was in it up to his neck in your entry on 28 March. Please expand.

Blair's latest list of proposed peerages is really turning into his very own version of Wilson's Lavender List. It's got the grimy hands of Lord Levy all over it [1]. Most on the alleged list have given substantial money to New Labour. Some of the elevations I think would be quite good. Denise Kingsmill is a top class business woman who will bring something to the house. She's also a long-standing 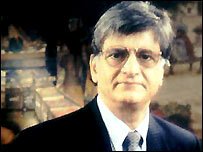 Party supporter. Unlike fly-by-nights like Sir Gulam Noon (right) - him of mass produced curry fame - who frankly is the supporter of whomever is in government and therefore more likely to make him a Lord (he has a terrible track record in non-recognition of unions), and Barry Townsley who I also have always suspected of being a Tory. But Chai Patel takes the biscuit -the corrupt former owner of the Priory and countless Old People's Homes - he is now 'demanding' his peerage! [2] Townsley, on the other hand, has decided he doesn't want one after serious investigation of his dodgy past, led by Private Eye. The whole peerages thing is corrupt. It is still one of the biggest forms of patronage still in the hands of the PM. I just wonder whether the PM really believes in sorting out the House of Lords, as it may just rob him of hos one first-class way of rewarding big donors and sponsors of City Academies!

I have been minded to write an explosive entry about millionaire loans to the Labour Party for a while now - one which could have the diary pieces wetting themselves with glee - but I won't as I retain some loyalty to my former employer. [3] Just a reminder - I was Head of High Value Fundraising and Endorsements during the three months from March to after the General Election last year, and was responsible for the weekly legal submissions to the Electoral Commission on donations (which we have to do weekly during elections, as opposed to three-monthly in peace time). Clearly No 10 were running a party within a party [4] - Blair, Lord levy, Matt Carter (General Secretary) and Ian McCartney were all complicit in the scam [5], and I knew absolutely nothing about the loans. I know all the individuals on a personal level 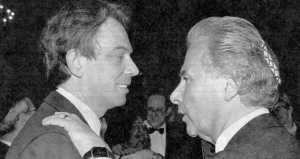 and there are plenty of anecdotes on them I could spill [6], but I won't. Most of them are genuinely nice people, although some of them I question their personal politics. What I mean by this is that they are basically Tories, saw which way the wind was blowing, and did what they needed to do to get the Peerage they've always wished for. Whereas others have been life-long Labour Party Members who want to contribute to the success of the Party. All but one of the loans came from known Labour supporters. If the journalists and media weren't so lazy, they'd have seen these names listed year after year in Labour's annual accounts and Electoral Commission submissions. The only one who was a new name was Richard Caring. And therefore I am unsure why Labour felt it necessary to keep this information secret, when there was virtually nothing new about the list of names. It seems to me common sense to be transparent about these names, despite there being nothing illegal about not disclosing information on those who made the loans. Why we had to be secret about Lord Sainsbury's loan is beyond me - he's given Labour about £15million over the past ten years. The original Political Parties Elections and Referendums Act (PPERA) 2000 was a shabbily and rushed piece of legislation and Jack Straw is widely blamed for this. It is a total failure of the legislative process for loans to not be identified as something which needed to be made transparent. This needs to be rectified asap, although Charlie Falconer's recognition of this yesterday was a pretty pathetically late show given the mire Labour is in now. I am suspicious of the involvement of some in the Labour Party who see this as an opportunity to reassess the financial link with the unions, which would clearly come under threat from any legal cap to the amount that could be donated. It's all a mess and one which might still have been a story if we'd been transparent (i.e more "cash from big business" stories, as opposed to "sleazy, secretive deals" stories). Why, oh why does it all seem much more simple to little old me sat across St James's Park from the increasing siege mentality of Downing Street.

Labour is still in a mess. I reiterate that peerages were given to people who had given the Party millions of pounds in donations, but to say that peerages were offered in return for cash is a very subtle but important difference. I still think the crucial questions are a) why were donors persuaded to change their donations into loans and b) to what extent was the Prime Minister involved? In answer to a) you have to conclude it is because they were going to get peerages and Number 10 didn't want people to draw a relationship between the two and b) the Prime Minister was in it up to his neck and was personally involved. [7]

So, the Police look like they'll want to talk to the PM when he returns from the Far East. It dawned on me last night, with the equivalent impact of me hitting a brick wall at some pace, that they will probably want to talk to me too. I'm now a little worried. Not about what they would ask me, or what I would say - but just being involved in such a high-profile investigation when I no longer work for the Labour Party. I haven't said anything to my current employer, as it is only likely to be difficult. Five years ago, when I left working for the CBI to join the Party, I never thought things would come to this.
Posted by Iain Dale at 1:08 pm

Presumably you will be forwarding to Yates of the Yard?

It cant be long before he is interviewed by the police after these full revelations. If what he has written is true, then he could reveal some very embarrasing and crucial details.

Why did the Mail on Sunday not print the full text from the blog?

Iain during a previous discussion on Mr Bowes some commenters said he had occupied no such position.(I've had look for the entries but can't find them-may have been on another blog but I'm sure it was here).They claimed he was a nobody.

Are you sure he had the job?

Jeremy, I'm sure Inspector Yates is a regular reader...
Tom, space I imagine
Rigger, You are right but the author of the comment removed it when he realised he was wrong. Nick Bowes himself gives his job title in the text.

Well done, Iain, this is priceless.

"I have been minded to write an explosive entry about millionaire loans to the Labour Party for a while now ........but I won't as I retain some loyalty to my former employer"

And how much were you involved with the Mail on Sunday's scoop Iain?

Stalin, you credit me with too much...

SOMETIME IN THE NEAR FUTURE...

David, Somehow I cannot see me being made a Lord... Good title though!

Absolutely fascinating stuff and it will undoubtedly add to the lack of confidence people already have with politicians.

The Met might want to interview you too Iain for the being the source of this exclusive.

Excellent piece of work, hope you don't mind if I link to it.

Did you know that Nick Bowes is standing for election to Wandsworth Council in Tooting ward? Have a look at his local website http://www.labourwandsworth.org.uk/tooting/aboutus.php for details!

Rohger, indeed I did. And I shall be commenting on it later this morning.

I wonder whether the Mail would like my copy of the Labour Party's General Election 2005 telephone directory which lists who held what position and with what title... (not to be confused with the kind of title you pay money for)