Thank God we won't have to put up with those neverending trailers for Fantabulosa anymore. I watched it a couple of nights ago, expecting to be bowled over. In fact, just the opposite happened. I've always been a Kenneth Williams fan, and while I know he lead a very sad life, I think this drama did his memory an injustice. It concentrated on his own introverted sadness without giving any insight at all into his comedy. To those too young to remember Kenneth Williams in his heyday it will not have encouraged them to find out more. I thought Michael Sheen's portrayal of Williams was generally over the top, although there were moments when he captured the essence of one of Britain's greatest ever comedic figures. And did we have to be shown him "pleasuring himself", as the tabloids would say? Not once, but three or four time. After half an hour I was willing the programme to end. 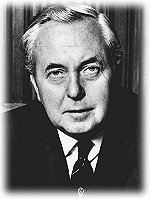 Quite the reverse was true for The Plot Against Harold Wilson. It's not easy to make a drama/documentary a success, but this one certainly worked. James Bolam was very convincing as Harold Wilson, although his hair was a little odd. I have always been sceptical about the idea of a plot which was supposed to have lead to a coup, but parts of this programme did make me wonder. I don't think that Harold Wilson resigned because of this, but there are questions which still remain unanswered. BBC4 have made some very good documentaries recently. It's a pity they are raraely shown on BBCs 1 % 2.
Posted by Iain Dale at 7:36 pm