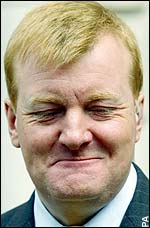 A few years ago I commissioned a biography of LibDem leader Charles Kennedy, which former LibDem head of policy and all-round good guy Duncan Brack was going to write. It was agreed on the basis that it would be published before the last election, partly because I had heard the rumours and wondered how long he could survive, but also because I felt he may well have stepped down anyway. To cut a long story short, Duncan decided not to proceed with the book and I had assumed the whole project had bitten the dust. However, it transpires that Times journalist Greg Hurst has picked up the cudjels and the book is slated to appear this August. It's called Charles Kennedy: The Tragic Flaw. I'm tempted to ask, why bother? Hasn't everything been said that could be said? Would anyone really want to spend twenty quid on reading about him now? But then again, given the choice of spending £20 on that or £20 reading about Mogadon Ming, what would you do?
Posted by Iain Dale at 11:47 am

Think I would rather put £20 on Ming to gone before the election.

"Would anyone really want to spend twenty quid on reading about him now?"

(Iain-I appreciate that "Amazon" isn't your favourite word, but I felt it was only fair to record this fact for the thousands of your blog watchers clamouring for this book.)

Given that choice and 20 pounds I'd go for 6 feet of rope.

Kennedy should write his own autobiography. If he dished the dirt, told some good stories, talked about the build up to iraq and was frank about the booze

he has got another 20 years in the commons if he wants it so why not have a bit of fun?