So Peter Mandelson is the 'Right man in the Right Place'! 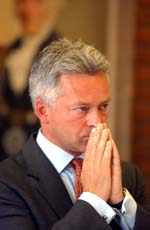 I've just been catching up with last week's Spectator, which contains a very interesting interview with Peter Mandelson by David Rennie. David Rennie is the Telegraph's Brussels correspondent, the job from which Boris first made his name. Rennie is a very readable guy and also has his own Blog. Two things stood out from that interview. The first was Mandelson referring to EU countries as "My Member States". I wasn't aware he was a Head of State - typical Mandelsonian arrogance. And the second was this quote from Alan Duncan, Conservative Trade Spokesman. "I actually think he's doing rather a good job given the pressures he's under. I hate to admit it, since he has been a considerable foe to the interests of the Conservative Party, but I think he's the right man in the right place." He's then asked if a David Cameron lead government would reappoint Mandelson for a second term. Hunky Dunky replies... "His (Mandelson's) commitment is to fair trade. I wouldn't say there is any great clamour among Conservatives to hang him and bury him, not a hint of it." My gob is well and truly smacked. I think I will leave it at that!
Posted by Iain Dale at 7:48 pm

Mandelson is not doing a bad job considering the position being taken by many European governments and too many European Commissioners. He's certainly better than the ridiculously overhyped Pascal Lamy.

What stood out for me was his reference to the potential allies of Conservative MEPs as being a "rag-tag and bobtail collection of individuals on the fringe of European politics".
I hope that representatives of those parties will write to Mandelson to suggest that an un-elected Commissioner really shouldn't be talking about the governing party of Poland and the next government of the Czech Republic (or any of the other parties involved) like that.

It is the same kind of old-Europe mentality that allowed Gordon Brown to claim that the British economy is growing faster than the rest of Europe - which is true if you don't count Denmark, Sweden, Spain, Ireland, the Czech Republic, the Slovak Republic, Hungary, Poland the Netherlands, Luxembourg, Greece, Finland or Austria - and that's without mentioning Norway, Iceland or Switzerland. Basically what Brown meant was, despite his very best effort to tie our economy down with red tape and high taxes, we're still not doing quite as badly as France and Germany.

When you take everything into consideration, the idea that an arrogant, overbearing, pompous person who refuses to listen to anyones opinion other than his own and who believes completely in his own infallibility is the right man for a job in the European Commission, you have to conclude that Alan Duncan has a point :)

Not really sure why it's so gobsmacking. We've got a British free-trader as the EU Trade Commissioner. Why would the Conservatives want to change that?

Oil agree with you on that one!