Charles Clarke in a Glass House 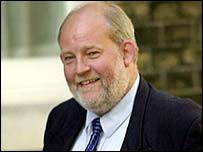 Charles Clarke should learn not to throw stones in glass houses. He launched an extraordinary tirade against Jack Dromey this lunchtime, saying that a decent Treasurer would know what was going on in Labour Party finances. However true that may be, he might also consider that a decent Home Secretary might well also institute financial controls within the Home Office enabling the auditors to sign off the Home office accounts for the first time in several years.

UPDATE: 5.30pm I'm told my my House of Commons snout that Charles Clarke was speaking at a lunch of female journalists - he shiould have known better. Nothing good ever comes from these lunches, known by their male colleagues as "Virago feasts" and several leading politicians have lived to regret accepting the invitation. Apparently Clarke caused further consternation by predicting that Tony Blair would stand down in the summer of 2008. By my reckoning he'll be two years out. But what on earth would possess him to start speculating? In one good lunch he's taken two opportunities to stick needles in Gordon's eyes. No doubt Gordon will excact his revenge in the way only he knows how. This has all the hallmarks of the dying days of the Thatcher government. And we all know how that ended.
Posted by Iain Dale at 4:50 pm

A decent Home Secretary would know how many failed asylum seekers there were in the country.

Clarke does have a point 'though Iain.Dromey must surely have wondered how Labour financed its election campaign or did 14 million just disappear into thin air?
Having said that if he can destroy Blair after one angry TV interview he's a top bloke in my book

He does have a point.

But somehow, I don't think this outburst is going to be very helpfull to the Labour party.

Where Bob Piper by the way?

He must have something to say about the loans for lordships fiasco, surely?

Tone & Dave to talk about Party funding-marvellous!
Assume no mirrors needed in room!

Since CK is a keen European why would he be worried about the accounts NOT being signed off?

Author-why so sensitive on Tone & Dave?