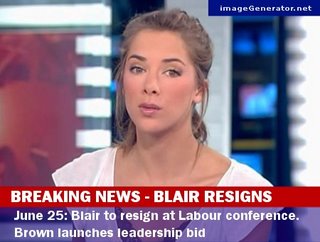 OK, I've got the old Dale crystal ball out - and very painful it was too (!) - but I reckon Blair will go this year. The political commentariat seems to think it will be 2007 before we see the back of him, but with every week that passes his authority is gradually slipping away. The continual delay over the long awaited reshuffle is evidence of a Prime Minister who is unable to wield the power he once had. I suspect that he will resign when we all least expect it. My money, if I had any, would be on a summer announcement that he will step down at the Labour Party Conference. This would then mean a two to three month leadership campaign. But then again, I could be barking up the wrong tree completely. Or maybe just barking.
Posted by Iain Dale at 9:51 pm

I'll be straight - I think you're wrong. I don't think he'll go this year. I'm not even convinced that he'll want to go next year, though events may force him to.

By the way - the word verification seems to be getting harder to read. It's a real pain working some of those letters out!

I agree with you. now the other parties have new leaders in place and he has said he will go what frankly is the point of him?

A bad set of locals will only add to the skids under him. Brown must have the spectre of jim callaghan in front of him and want at least a few years of being PM.

Forget all that. Who's the beautiful lady in the picture? One has to get one's priorities in order!

I can't recall the last time "a dangerous power mad megalomaniac" had a increasingly angry, grumpy and Scottish powerhouse chasing him.
When Blair has served his purpose, Brown is going to give him a good political pasting and will probably evacuate the bowels of Blairism for good measure.

On my Blog, I add another important element to this scenario - Brown will go straight to the polls for a general election and a new mandate in his own name, probably based on the withdrawal of troops from Iraq.

You bastard - I saw this headline on the witan aggregator and thought that he had.

I would agree with you Iain.Remember he's had 'wobbly' moments before and it must now be obvious to him that staying on any longer willresult in his 'legacy' look even more tawdry than it does currently.
Richard Bailey also makes a good point,I hope Cameron has some good ideas up his sleeve in case this happens.
William Rees-Mogg also makes the same point in the Times today so it probably means nothing will happen as dear old William gets it wrong every time doesn't he?

Perhaps the he can't let go as he has the Tiger by the tail. Worried of what any successor may discover ? ( OK no need to worry about Loans for peerages or their being no WMD in Iraq any more ).

I reckon he will go or be got rid off (probably the former) by the summer too many things are stacking up against him and damaging the party.

I think it's going to be sooner rather than later.He's finished. look at the rats leaving a sinking ship to it.
I think RB is right.Brown will be at the polls-if he can afford it- toute suite.

September is my bet. And its largish.

It strikes me that Mr Cameron had better inject a note of considerable urgency to the various policy review groups.

Normally within the first year of a new parliament the opposition parties would have a degree of safety in reviewing and renewing their policies, but with every week that passes this government seems more and more fragile.

In this climate, 18 months to formulate the policy for the next GE seems like a very dangerous vacuum at the moment. If TB does indeed vacate No.10 before the year's out then GB may well call a snap election, and it will be his gamble that the Conservatives will not be able to craft a solid manifesto.

TB staying till next year isn't necessarily a bad thing for the Conservative.

For the previous poster the woman in the picture is french news anchor Melissa Theuriau.