My Weekend in Washington DC 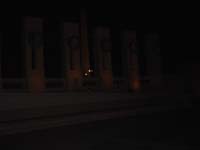 Well I never did get to the Holocaust Museum on Saturday. I didn't get out of the hotel until mid afternoon due to the Michael Hintze exclusive, which most (but naturally, not all) of the papers were good enough to credit me with. So by the time I drove down there it was impossible to find anywhere to park. So I ended up going for a drink with a friend, Mark Milosch, who I hadn't seen for 14 years. The Willard Hotel, where we went, is famous as it was the watering hole which President Ulysses Grant used. In fact it's claim to fame is that it is the home of the word 'lobbyist'. Apparently businessmen would fill the lobby of the hotel waiting for Grant to emerge from one of the bars so they could talk to him. Hence the word 'lobbyist'. You learn something new every day. Yesterday I recorded a couple of 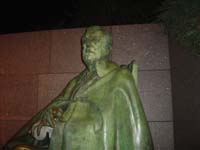 PodCasts with Mark, one of which was certainly different - he is a great Sinatra fan and we talked for 10 minutes about Sinatra's influence on American politics. It was spiced up with a recording of Sinatra singing a JFK campaign song in 1960! In the evening I did a tour of some of the most spectacular monuments in DC - The Lincoln, Jefferson, FDR Monuments and the new World War II Memorial (pic above right). I hadn't been to the FDR or Jefferson ones before and have to say I found the FDR Monument particularly hideous and inappropriate - full of waterfalls without a real centrepiece. The Jefferson Monument, on the other hand is magnificent. The four quotations used around the circular hall, which houses his statue, were awe-inspiring. Take this one... 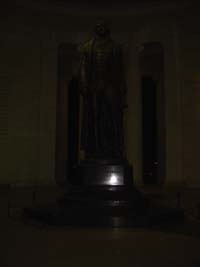 I am not an advocate for frequent changes in laws and constitutions, but laws and institutions must go hand in hand with the progress of the human mind. As that becomes more developed, more enlightened, as new discoveries are made, new truths discovered and manners and opinions change, with the change of circumstances, institutions must advance also to keep pace with the times. We might as well require a man to wear still the coat which fitted him when a boy as civilized society to remain ever under the regimen of their barbarous ancestors.

A good definition for modern conservatism? The World War II Memorial reminded me of one I visited in Normandy. It's not grandiose, but it is very moving. Even at 10pm there were many people there, some deep in thought. It contains a pillar for every State of the Union, commemorating those who died to protect our freedoms.

Today I'm off to Georgetown and then I'm going to try to get to the Holocaust Museum this afternoon. And for those who are interested - I'm back in England on Wednesday, so normal service will be resumed!
Posted by Iain Dale at 3:36 pm