Michael Howard to Step Down 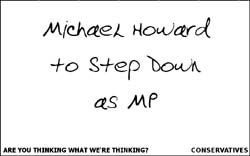 I understand from friends in Folkestone that Michael Howard will announce this evening at a meeting in his constituency that he is to stand down from the House of Commons at the next election. In many ways I think this a shame, as we could do with some wise old owls on the Tory benches after the next election. After all, David Davis is the oldest member of the Shadow Cabinet at the ripe old age of 56. I expect therefore that Folkestone will become one of the first constituencies to select a new candidate from the A List.
Posted by Iain Dale at 6:44 pm

That is a shame, hopefully the man England elected to be Prime Minister at the last General Election will reconsider and stick around for another term next time round.
It goes without say he would have made an infinitely better PM than this thing we have in power at the moment.

It will give him more time to cheer on Liverpool. I for one will be sad to see him go. I think we forget what a short time he had to take us into the last election.

Well get in there then Iain old son!

The early bird catches the safe seat & all that!

then again in the real world where(at the minute) policies are behind presentation in importance,his days were always going to be numbered.
I worked my knackers off for four weeks at the last election sure in the knowledge that the voting public ,whilst espousiong virtually everything we stood for,would not put him in number 10.
Anne Widdicombe had him down to a tee.
He's up there with Hague who was/is similarly unelectable but would have made a decent PM

When Widdy said there was something of the night about him, it was an understatement. He is the very darkness.

A more autocratic, vindictive megalomaniac never led the Conservative Party. He is Prosecutor, Judge, and Lord High Executioner rolled into one. He knows no reason, no compassion, no humanity.

I hope to God this rumour is true, and that light will replace the darkness.

That remark did for Howard, but it did for Widders too.

The man was not darkness, he was not nasty, by god so not, and trust me when I say that many a person living in F&H will be sad to see him go as he has been a bloody good local MP, and that is the thing he was elected to do first and foremost

I'd disagree with rigger mortice on William Hague - I think he is very definitely electable. He never was going to stand a chance in 2001, but I think the British public do seem him as electable.

Oh, and as for F&H, I will say this - whoever wants to run for it will need 2 things to gain candidature - the support and endorsement of MH and the hearts and minds of the large activist core within the association

People have started talking about which Gold Listers will jockey for position, F&H will not be as simple as, say, winning selection for Thanet South (far smaller activist base), as they are less likely to accept having someone just foisted on them...

I am going to enjoy watching and voting in the battle for Shepway (the seat changes name soon)....

Milkybar Kid, I am pleased your experience of Howard leads you to your conclusion. For you, he may be 'one of the nicest and most generous and genuine people', and he may indeed work hard in F&H, but do not let your subjective adulation negate the experiences of Widdecombe, Flight, Hilton or Kruger. There are too many experiences antithetical to yours to be ignored.

He is a vindictive cynic with a smile, and you are entranced by the facade. Darkness lurks beneath the aura.

I say it again, rejoice!

rejoice,they are the exact reasons I think he'd have amde a great PM.Deep down,he was a conservative but he was ruthless too and cunning.I don't think nice Vicar types suit being PM,just look at TB and the mess he's leaving behind.

"I don't think nice Vicar types suit being PM,just look at TB and the mess he's leaving behind."

Rigger, this is odd. TB has been a manifestly successful prime minister and consummate politician. He shines a light, and people believe that light. Whatever his flaws, and whatever mess he leaves behind, people believed in his sincerity - he has virtually walked on water for a decade.

If this is what Vicar-types can achieve, give us one over a prince of darkness any day. Whatever praise you want to heap on Howard, people generally couldn't bring themselves to 'like' him. There was indeed, an indefinable 'something of the night' about him. Good riddance.

Iain-think your a year out with DD!
Still fitter than men fifteen years his junior and who knows--when all the toys have been thrown out of the pram.....................!!!
PS-will be interesting to see whose pal gets Folkestone

Rejoice: didn't your mother tell you one shouldn't speak ill of the undead - they make come back to bite you!

"Rejoice: didn't your mother tell you one shouldn't speak ill of the undead - they make come back to bite you"

Thank you, Jake-the-Peg, for confirming my suspicion that Howard has something of the undead about him. I know one of those who was bitten by this blood-sucking creature, and (thankfully) they were not terminally affected. It must have been down to garlic and a crucifix.