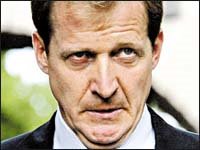 The Times reported yesterday that civil servants will in future be banned from writing their memoirs, and if they do manage to publish a book, the government would seize all profits form royalties or newspaper serialisations. But in the same breath as announcing this, Foreign Secretary Jack Straw said that he fully intended to write his own memoirs. Breathtaking. Speaking before the Public Administration Committee, he said "memoirs serve a very important purpose - as long as they are written by ministers, not unelected officials." He is so wrong. Surely it is just as important for us to understand the inner workings of government from the civil service perspective, as it is from a Minister's? I published a civil service memoir a few years ago called A Mandarin's Tale by Sir Roy Denman. It failed to trouble the bookshop tills very much but I felt it was an important book. Is Jack Straw really saying that Sir Nicholas Henderson's diaries Mandarin should never have appeared? Or that he should never have written his book called The Private Office? This is above all a question of free speech. We do not live in a Soviet State where secrecy is the watchword. At least, I thought we didn't. In my view civil servants should be just as free as Ministers to publish their recollections of their working lives. But I guess we now have to ask ourselves if Jack Straw's ban will apply to Alastair Campbell, who was, of course, a civil servant (technically, anyway). Could he now lose out on his multi-million pound nest-egg under these draconian new rules? The thought is almost too joyful to contemplate. I think my colleagues in Her Majesty's Press Corps should push for a clear answer to this most important question.
Posted by Iain Dale at 10:47 am

And if the writer flies to the US & sells world rights to Murdoch under US law? Perhaps the US will extradite a US citizen for acts done in the US in reciprocation for us doing the same for them - any bets?

There is a difference though. Ministers live their lives in public and are accountable to parliament. Civil servants do not.

If we made senior civil servants political appointees (makes lots of sense to me, actually) then it would be a different matter - they would live and die by the politcial sword. But you cannot have a situation where ministers are dealing with people calculating what is a good story for their memoirs or not.

For instance if Treasury officials were to start writing about what they thought of David Cameron it would be grossly unfair as they would have changed the rules, post hoc, on their interaction with him.

But I take your general point. There needs to be discretion, but how that is to be done is quite difficult.

Tnew rules will not result in a ban on Alistair Campbell publishing his diaries because they are not retrospective - they will apply to new civil servants.

Much as it would give me great pleasure to see Campbell's big payday sequestrated by the public purse, I think democracy would be the loser. In my view it is essential that Campbell's diaries are made public so we can read for ourselves how he managed to lie for Labour for so many years, and cajole so many political journalists into swallowing the Blair line.

There are lots of honourable exceptions besides me, Iain, eg David Hencke, Nick Robinson, Peter Oborne, Simon Walters, Elinor Goodman, Nick Jones, the late Hugo Young, and most if not all of my former colleagues in the regional lobby.

But there are a lot of others I won't name who did fall for it.