Margaret Beckett: You are a Hypocrite 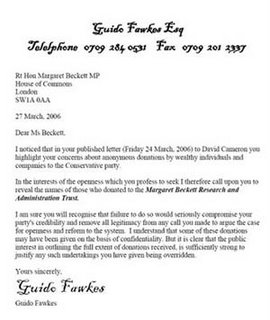 Guido has scored another exclusive with his letter to Margaret Beckett. Visit his site for the full details, but essentially he is asking her to make the donors to her Blind Trust, which she ran in the 1990s, public. He is saying that her failure to do so will raise questions of hypocrisy after her letter to David Cameron asking him to make public the names of the Tory supporters who have lent the Party money. Let me make my position clear on all this. I believe it would be best if the names were indeed made public. I have always thought transparency is best in all aspects of politics, but there is a problem here. If you have entered into what is effectively a commercial agreement with someone and part of that agreement is a confidentiality clause then you have every right to insist that the agreement remains confidential. No laws have been broken. No regulation has been ignored. If not, what you are asking the leader of the Conservative Party to do is to breach a confidence. Understandably David Cameron has not done this, and no amount of pressure should force him to do so. We all know the Labour Party is trying to deflect the fire away from itself onto the Conservatives, but apart from The Guardian and The Times, few in the media seem to be falling for it. I am quite sure that Jonathan Marland (the Tory Party treasurer) will have been trying to persuade the lenders to go public, but they are quite within their rights not to do so. Again, this whole episode moves us an inch closer to state funding. It will soon be totally inevitable because people will just stop donating money or lending it to political parties if this is the kind of flack they can expect. In only nine years New Labour has corrupted the political process to such an extent that anyone who donates money to a political party is accused of wanting something in return. You look at the New Labour peerages and the people who have lent them money and you can see why that is. For them to say the Conservatives are at it too is stretching things too far. The Conservatives have nothing they can give to donors even if they wanted it. They're not in power. They don't have control over the awarding of government contracts. They don't control the honours system. Indeed, part of the reason why Conservative lenders may not want to go public is that they fear this sleaze ridden government might exact revenge and not award their companies contracts if they donate to the Opposition. Yes, that's how low things have got. And there's only one person to blame for this. Our 'white than white' Prime Minister- you remember, the one who tells us he's a pretty straight kinda guy'. The fact that he ever felt the need to say that should have told us all we needed to know. The sooner the Labour Party get rid of him the better.
Posted by Iain Dale at 4:16 pm

Decent post, to the point and true. It’s astonishing how stupid these Neo Labour lot think people are! Do they really believe they’re going to fool us into looking the other way on this??

Your point that the Tories can't dish out peerages under the honours system is wrong of course. Both Tories and Lib Dems (and a handful of others) get a specific number of peerages to distribute as they see fit (there are checks but only on a basic "are they a Russian agent?" level and not a real debate over it). Leading donors like Lord Black and Lord Kalms got their peerages long after the Tories left power under precisely this system.

I personally think government contracts are a red herring. It is an area I have worked in and the public procurement regulations at both UK and EU level are pretty tough and rigorously enforced (in this country at least) - if only because my clients make damned sure of it if they feel aggrieved. You need a genuinely robust and weighty paper trail with clear reasons why a bid represents best value based on pre-determined criteria and the donkey work is all done at well below ministerial level. It is more than far fetched that a minister could change a result on a whim. That said, the party donation system is in enough of a mess for that impression to get out - I am no defender of the government over this fiasco.

The sooner the Labour Party get rid of him the better.

There's much more advantage to the Tories in having him stay on!

I have a theory. Bliar knows the games up, he knows he's nearing the end. So he's doing all he can to seriously f*ck up Gordons chances of having a successful administration (not that he'll need any assistance there, in my view)

Iain, have I missed something? Do the Conservative Party leadership no longer nominate Peers? If not, how are Tory Peers nominated? If they do... what is to prevent them from nominating those who have loaned/donated the millions of pounds the Tories have received? Cameron squirmed on the radio this morning when asked to name the loan sharks who bankrolled the last election. "I want to change the rules for the future" he said, which seemed to be precisely Blair's response too. Who are the Tories covering for? AND WHY? That is the question that won't go away. This flip-flopping over not being awarded government contracts is nonsense and you and everyone else knows it. The Blair Government has awarded more contracts to Tory donors than even the Tories did, it's a flimsy excuse for a cover up.

Something which has surprised me is the amount of money candidates for party leadership spend on their internal campaigns. Blair spent £90,000 back in 1994 on his(according to biographer, A. Seldon) though one wonders what on earth such a sum could be spent on-leaflets? videos? cocktail parties? These people are well known in their parties but still they need fat cats to fund their efforts to further convince their peers.

I wonder how much Cameron spent on his campaign last September to December, but at least that entailed going out to meet the membership.

Well, what a surpise, a Tory wants rid of Tony Blair. I the Labour Party take note and draw the appropriate conclusions!

Can I also point out - as I know you are fair Iain - that Guido's story is eight years old - it was fairly comprehensively covered in the newspapers in March 1998, a point which I made to Guido but which he repeatedly deletes from his blog.

The last point to make is that the idea behind a blind trust is, err, it is blind. In other words you don't know who gives the money. The trustees do, but you don't.

They used to be quite common but are now unlawful.

anonymous - We'll gloss over Lord Black. Stanley Kalms is one of Britain's leading businessmen, having made Dixons into one of the leading British companies. I would suggest that he deserved the Peerage for that alone. He was also Treasurer of the Tory Party, a position which has usually lead to a Peerage regardless of whether the Treasurer has made donations personally or not.
Bob, Yes of course the Conservatives nominate Peerages. I wasn't suggesting otherwise, but I thinK DC had already made crystal clear that under his leadership donors wouldn't be put up for Peerages in the same way as might or might not have happened in the past. The last batch were nominated by Michael Howard. Only one had donated money to the Tory Party and he has been blocked by the Appointments Commission - wrongly in my view. You suggest that we're covering up. How? Ridiculous. As I made clear, I would much prefer to make everything public and am glad that will be the case in the future. The trouble is, that after this shenanigins I doubt whether anyone will bother to lend or donate in the future.
Skipper, both DC and DD spent just under 100,000 during their leadership campaigns. That was the limit.
anaonymous, methinks thou dost protesteth a little too much. You either agree with transparency or you do not. Beckett says she was complying with the rules at the time - which she was. DC says he is complying with the rules of the time too. QED. She can't have it both ways.

You also forget to mention that part of the Beckett justification is that it was a "trust set up while in Opposition". Hmmm... Just like the Conservatives have been since 1997 then? She really needs to get off her high horse.

Anonymous - your point about the blind trust sounds great, except I believe the trustor isn't supposed to be able to control the money, either. I seem to remember that Tony Blair's cash from his Islington house sale was allegedly in a "blind trust". This trust proved to be not even short-sighted, let alone blind, when Cherie wanted to buy the flats in Bristol with the help of convicted-on-3-continents Peter Foster, and had no difficulty whatever using the money from the trust for that!