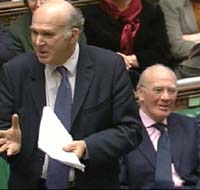 The LibDem Parliamentary Party tonight narrowly elected Vince Cable, 62, as Deputy Leader of the Liberal Democrats. He beat off a strong challenge from Matthew Taylor to win by 31 votes to 29 after David Heath had been eliminated from the first round after scoring only 17 votes. Taylor had been ahead on the first round by 25 to 21. You have to hand it to the LibDems. Only they could think that the best response to a new revilatised Tory Party, lead by a 39 year old, would be to elect two pseudo-geriatrics who are indistinguishable from each other. They're bound to be dubbed the Grumpy Old Men as neither is exactly over-endowed with a rib-tickling sense of humour.
Posted by Iain Dale at 9:01 pm

It was once suggested there was something of the silence of the lambs about VC. A bit harsh I thought but made me chuckle. As you say, hardly the most inspiring choice.

Strangely enough I don't think everyone wants the country to be run by a schoolboy comedian.

At least the Lib Dems are doing something right: opposition to ID cards.

Thanks to the Tory capitulation in the Lords, the ID Card bill will recieve royal assent shortly.

Not everbody, but that's still more than want the country to be run by the Liberal Democrats

Anony - but do the country want to be run by two men who should be drawing their pension and may not stand up to the vigour and demands of government?

I think this was a class A strategic mistake on the part of the Lib Dems - they could have taken the chance to have a "younger head" who was still older than DC, and show the way for their transition in 5 years time - that would have given the public something to vote for

Instead, we know we can look forward to another beautifully bloody leadership contest when Ming and Ving step down in 5 years....

Waldorf and Stadler (sp?) methinks. "Rubbish! Get off!"

As a Conservative Party member it pains me to admit it, but I was more impressed by Vince Cable's broadcast in reply to the budget than by that of George Osborne.

Was at Ming's bash for his campaign team tonight. He was withering about Osborne's performance. He's the weak link - in a battle for economic credibility, Osborne will come third behind Brown and Cable and I strongly suspect both Labour and Lib Dems will be directing their fire his way.

That aside, am quite surprised that Matthew Taylor didn't win the vote. Ashdown and Steel also in attendance at the do.

Very pleasing result. The face of the LDs is now balding and grey, as is his stand in.It matters,regardless of whether you think it should or not.

Oi, Stalin's Gran, that is my copyright! It is dead on though isn't it:

I like them though. Milkybar Kid is just talking rubbish - as a young person I just find propogating this idea that people over sixty can't stand up to the supposed rigours of public life says more about Milkbar Kid than it does about Cable or Campbell.

Iain, I have just noticed that you still have your "no to ID cards" link on your website. Surely you should be getting rid of it in line with your party's capitulation, I mean policy re-configuration, if you are to stay on the A-list.

much as I never usually agree with what inamicus has to say,on the issue he's raised he's probably right.It's not that george knows any less than GB(because all he's done is borrow shedloads of money,spend it and call it growth),I just think he comes across badly-I'll stop there before I get a little too honest.

Things are going from bad to worse with the Lib Dems it seems. It was patently obvious that what was needed was a balanced ticket. I'm not surprised Cable prevailed over Taylor whose political career has been in decline for some years, but the job should either have been given to Kramer or Huhne, prefererably by acclamation.

I would rather vote for "Grumpy Old Men" than treacherous swines who capitulated over ID cards.

As a Lib Dem this is something of a disappointment. Vince Cable is an excllent Shadow Chancellor, and yes, so much more impressive than Osborne. But we needed someone to counteract Ming. David Heath would have been ideal - a 'bearded Liberal' maybe, but his performance at PMQs this week was barnstorming.

That all said, the deputy leader isn't too important. After all, the Tories don't even have one...

Aged 32, I am a by instinct primarily a Conservative but I'm not overly pleased by Cameron because he is too young. He hasn't done anything in life - he's not experienced. All things being equal I would rather an older candidate rather than a career politician. Charles Kennedy was the same, so the new leader is more tempting to me.

If only everyone was as enlightened as you, anonymous! Sadly we live in a world where the cult of youth is rampant. The Lib Dems will pay dearly, in my view, for their failure to recognise this fact.

I agree with the previous anonymous that the deputy leadership isn't that important, but having made the mistake of electing someone who comes over as an awkward throwback to a bygone political age, they should have sought to balance the ticket by choosing someone younger and/or female.

"When we were young, it was all fields round here."

"Chris Huhne? Never heard of him."

Whatever may be said about George Osborne, it takes time to acquire experience, and he's got that time - the same can't be said about Vince Cable.

Not being in the first flush myself, I still think a more balanced team would have conveyed the impression the LibDems had places to go, rather than having their best years well behind them.

points made above about the balance elucidate my point far better than I did - that the LDs missed the chance to have a balanced 1-2.

The reason Michael Howard, who is hardly lacking energy, stood down was because he was being realistic - by the time of the next election, he feels he will be too old tobe in government - and he has been there, so he knows how much it takes out of you.

I am not sucked into the cult of youth at all, anony - if you read my post beyond the first paragraph, I said they missed the chance to bring in someone older than Cameron but still younger than Ming who could act as a steadying hand when the next transition in Lib Dem leadership inevitably comes - my god, that still leaves a gap of say 5 - 10 years to have someone in their mid 40s to early 50s who will be around for 20+ years (if they don't lose their seats) - hardly "Youth"

I do think this is a serious strategic mistake, and the LDs will rue this in the coming decade