Prescott Demands (and gets) BBC Right of Reply 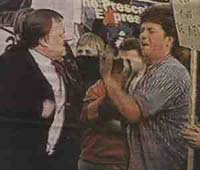 The Deputy Prime Minister is not a happy bunny. He rang up the BBC this morning ranting and raving about the coverage of his, er, coverage in today's Sunday papers and demanded the right of reply. He is apparently accused of waving through planning permission on a controversial project in the City of London and in Croydon which were the brainchild of two Labour donors/lendees. So he rang the editor of the Politics Show and demanded to go on live. And you know what? The BBC naturally said 'yes'. I guess you can't really blame them, as we all know what can happen when Prezza gets a little narked.
Posted by Iain Dale at 3:06 pm

As a Tory I want to see more of Prescott on TV.He will just show more people in this country what a moron he is.

Not surprised he was unhappy.

Does that give him a right to go on the Politics show though anonymous?

I'd love to see JP deal with the Tory press in the same way as he dealt with that egg throwing yob who assaulted him.

jonathan, given that the BBC morning news broadcasts had repeated the incorrect 'Prescott scandal' stories on their morning news and current affairs bulletins, it doesn't seem entirely unfair of him.

If you're a journalist with a show about politics, and the deputy Prime Minister, who is on every front page in the country, wants to come on your show, why wouldn't you want him on?

Am I going mad? Where did I slag off the BBC for allowing him to go on?! I quite understand their decision and would probably have done the same thing! It was a very funny interview. I watched it on the internet. He didn't really do himself any favours did he? "I've not made any money from politics" he said. No, of course not. That's why he can afford 3 houses. And two Jags!

Yes, I too enjoyed the "not made any money from politics" line. Guess he thinks everyone enjoys free accommodation at Admiralty Arch, not paying Council tax for years (until caught), huge expenses without having to prove he's actually spent the money, use of a stately home called Dorneywood, free car & driver - the list goes on.

As he's made such sacrifices for his political career one might wonder why he doesn't return to his previous employment as a Steward in the Merchant Navy - perhaps that was more lucrative..........