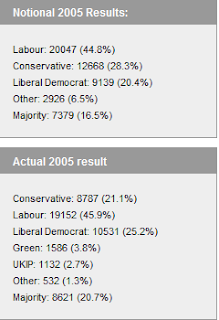 Whatever your views on the rights and wrongs of the #kerryout campaign, the fact that Adeela Shafi, Conservative candidate in Bristol East, has raised more than £1,000 in three days on her MyConservatives.com page demonstrates that it is possible to raise money for campaigns through small donations made on the internet. I suspect most of the donations were in the £5-£20 bracket. If you make it easy to donate, people will do so, if you give them a reason to.

One other aspect of this is that it has shown the LibDems to be as unfamiliar with the truth as ever. They have tried to make out that if you want to beat Labour in Bristol East you should be supporting the LibDems as they came second in 2005. So far so true. What the LibDems don't tell you is that after boundary changes, they came a distant third on the notional result, according to Rallings & Thrasher and UK Polling Report. Same old LibDems, lying here.

If you haven't yet donated to Adeela's campaign, but would like to, click HERE.
Posted by Iain Dale at 2:48 pm

I think the Tories made the same claim in Edinburgh South last time Iain. Double standards ?

I'll bet the Lib Dems' candidate is crap too. They usually are.

I don't mean to be too cynical (after all, I've been saying that the 2010 election will rely on the net for months) but surely the Obama and McCain campaigns in America proved the value of the net in fund raising far more then this. I believe several million more in fact ;) It will be interesting to see how the UK parties use those same measures given the vastly different campaign structures.

Where's your next target?