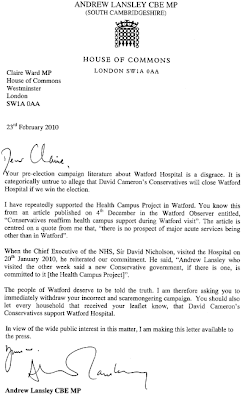 Click on image to enlarge
Earlier today I blogged about the Watford Labour MP Claire Ward and her disgraceful campaign to scare the voters of Watford into believing that the Conservatives would close the local hospital. Conservative Shadow Health Secretary Andrew Lansley has hit back hard with this letter.

When Labour comes under fire they normally try deflecting tactics, and this case is no different. LabourList have posted an article urging people to remember the terrible antics of the previous Tory candidate Ian Oakley. I condemned Oakley at the time. Perhaps LabourList would like to do the same to Claire Ward. I am not holding my breath.

I was also intrigued to see a blogpost from former Labour MP Jane Griffiths, who has some less than fond memories of Ms Ward.

Here is what Iain Dale has to say about Claire Ward, the Labour MP for Watford who featured in a steamy News of the World story a few years ago which related to some incidents which took place during a visit by members of the Parliamentary Armed Forces Scheme, including myself, to Kosovo. On that occasion she behaved like a slapper and lied about it afterwards. After the story appeared a Labour Party press officer rang me to say that she was suing the paper and could I confirm that it was all rubbish. No I could not, I said, and what was more if it came to court they had better not call me as a witness (which I was) because I wasn't going to lie under oath. Long silence on the other end of the phone. No libel action against the Screws. Anyway, here is Dale on Ward:

I do not think it is over the top to call Claire Ward a liar. Hopefully she will get her comeuppance in a few weeks and will lose her seat.

For him rather strong language.

She should have read the first draft.

UPDATE: A reader alerts me to the fact that Watford LibDems have today had to apologise for a misleading leaflet distributed in the town. More HERE.
Posted by Iain Dale at 6:44 pm

I don't know which aspect is more heartwarming, the fact that Lansley now disapproves of scare stories or that Griffiths is still not bitter about being deselected.

I think the most heartwarming thing is Jimmy thinks his posts make a difference, bless.

Oh why are they "David Cameron's Conservatives"?

Is there any other sort?

Can we have more on that story about her acting like a slapper with the Army in Kosovo? Sounds juicy!

Oh, so no comment from Lansley saying he will "ring fence" funding to NHS hospitals?

My comments previously on your blog still stand. The Conservative "any willing provider" policy will represent a real cut in funding to NHS hospitals and will result in the closure of NHS hospitals.

"Oh why are they "David Cameron's Conservatives"?"

Isn't it awful? It was in there twice, too.

I assume people who vote for them will be "David Cameron's voters", in which case please count me out.

If there is the slightest shred of anything that looks like a Conservative party in there somewhere, I'd be glad if someone could point it out. Horrible slogans and endless artificial bullying complaints certainly aren't it.

On balance I prefer the sound of 'David Cameron's Conservatives' to that of 'Gordon Brown's Socialists'.

This letter by Landsley is all well and good but who in Watford will read, see it, or even hear of it? Unless it's published in all the local rags and the local Conservatives counter it "on the ground": I would suggest a similar leaflet claiming that she and Labour will close the hospital.

Begging the question is a specific kind of informal logical fallacy, and I don't think that's what you mean.