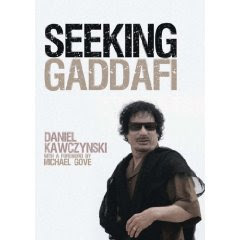 When I was approached by Tory MP Daniel Kawczynski to publish a book about Colonel Gaddafi, I must admit I was sceptical. But he wore me down and last week Biteback published his book, SEEKING GADDAFI. It's a fascinating study of the man who has ruled Libya for more than forty years. It's also had a very positive review in today's Sunday Times by Stephen Robinson.

Kawczynski is a 6ft 8in tall Tory MP of recent Polish descent who views Britain’s emerging relationship with Libya with a detached bemusement. As chairman of the All-Party Parliamentary Group on Libya, he argues that it is perfectly reasonable that the British government should cut deals that allow firms such as BP to share the vast oil wealth that Gadaffi withholds from his subjects.

This is a lightly written and well-researched account of Gadaffi’s life, though dependent largely on secondary sources. Kawczynski failed in his efforts to meet his subject, an obvious flaw in a book called Seeking Gadaffi. But it offers an intelligent analysis of Britain’s relations with Tripoli, even if Kawczynski seems as conflicted as many of the Lockerbie families as to Gadaffi’s culpability in the Lockerbie attack, pointing out that Iran also had good reason to order the bombing.

But he is surely right to be enraged by successive governments’ refusal to order a proper public inquiry; and he finds it shameful that London has normalised relations with Libya without ensuring that the killer of policewoman Yvonne Fletcher is sent for trial here. He is disgusted, too, that the government has not pursued justice and compensation for the victims of the IRA bombs made with Semtex provided by Libya.

"...it is perfectly reasonable that the British government should cut deals that allow firms such as BP to share the vast oil wealth that Gadaffi withholds from his subjects."

The developing world is riddled with governments that care nothing for their citizens, looting them for private gain and often with the assistance of multinationals based in Europe, the US, East Asia and now, increasingly, China.

Is this supposed to be rendered moral because the corporations are ripping off immoral and autocratic governments?

Wasn't Kawczynski the twat who didn't stand up to plod when they wanted to search his office in the Houses of Parliament?

Another good book about Gaddafi is