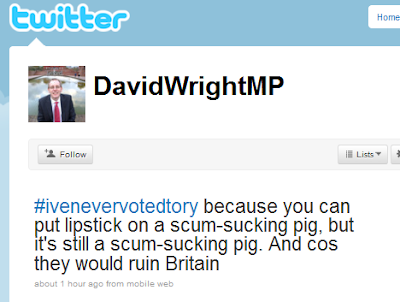 Posted by Labour MP David Wright on Twitter at 4.30pm.

UPDATE: Comrade Pickles has weighed in with some timely comments:

"This is exactly the sort of politics that voters are so sick of. This morning, David Cameron and I set out why people should vote Conservative for the first time. All a one of Gordon Brown’s Ministers can provide in response is gutter language. This sort of language falls way short of what you’d expect of a Minister of the Crown."

I hadn't realised he is a Minister. It just shows what depths they have had to go to to fill the whip's office.
Posted by Iain Dale at 5:41 pm

And when I say disgrace what did he tweet, well... "Oh dear, upsetting Tories again. Must’ve hit a nerve".

Pathetic. I had robust debates with my Labour opponent at the last election, but I find this sort of politics just sad. And MPs will say we want turnout to increase.

A little growing up is what's called for!

A trougher calling others pigs... oops.

too many tweets make a twat

Didn't take them long to show their true colours . . .seemingly typical behaviour for Labour MPs. If they're not lying they're squealing obscenities at people. Vile.

Can't wait for the next Tory own goal, I mean poster campaign.Maybe they can do one about 54% of poor 18 year olds being pregnant?

54% of teen pregnancies in dep areas of England, no 5.4%, A total insult to the YP I represent.

"Can't wait for the next Tory own goal, I mean poster campaign.Maybe they can do one about 54% of poor 18 year olds being pregnant?"

But seriously, there was an article on politicalbetting.com about how people and MPs feel about their party; it basically suggested that Labour MPs were both more tribal and class-aligned, and more likely to see the Tories as the same (only for a different class). Tory MPs, on the other hand, both considered themselves to be for "everyone" rather than a certain class, and that the Labour party was equally classless.

I think that explains a hell of a lot, from Mr Wright MP's unpleasant views to Broon's dividing lines.

pound to a penny that the prat had just come back from a wet lunch and broken that cardinal rule of digital communications: don't mix 'em with alcohol.

pound to a penny that the prat had just come back from a wet lunch and broken that cardinal rule of digital communications: don't mix 'em with alcohol.

Hey red rag, at least the tories can admit their mistakes, unlike your family death exploiting cycloptic phone chucker.

NuLabor one will be along a lot sooner Red Reg

This sort of language falls way short of what you’d expect of a Minister of the Crown."


Not if that minister is a Labour mininster.

This is but a dress rehearsal for you 'aint' seen nothing yet as the actual election campaign will see Labour plunging to new depths of mud-slinging and personal abuse towards their opponents.

Labour are a party that has nothing left to fight with but dirt, constrained as they are by their fear of having to fight on either their record or their policies.

Thank goodness he is not one of those people you thought was above these things .... :-)

The 'lipstick' quote is quite passée by now. The scum sucking bit (if indeed it was 'scum' and not some other four letter word he was alluding to) was the cheap and nasty bit.

And I thought the Tories were the nasty party...

Not knowing how to behave is exactly what I would expect of a Minister in this government.

Some of those on the left certainly come up with some delightful phrases on occasion.

Yet again a public figure proves that Dave was right in deciding not to twitter.

Whilst I'd suggest his words were ill judged, and hardly likely to do his election campaign much good, It's all "sticks & stones" stuff.

Certainly no worse (or admittedly much better) than Tory Bear saying Gordon Brown looked like a paedo.

I do wish the election would hurry up. I'm bored with it already.

Danny Lee - they haven't got a clue about the YP or poorer families, that is why when it comes to making a statement about them, they are clueless.

northernheckler, remind me, which political position was torybear elected to?
Which set of rules is he supposed to abide by?
What was the point of your comment?

And now it's reported that his Twitter account had been hijacked. Which is pretty credible actually, and he'd hardly have been likely to use those words would he now.

This cretin is my MP. Check my favourited tweets at http://twitter.com/wonkotsane for some other inappropriate tweets. He's insulted me whilst drunk at his Christmas party and tried to intimidate me saying unions will sue me the other day for questioning union funding of Labour!

He may be trying to provoke us into recruiting Sarah Palin since a less gratuitously offensive variant of that quote was the one occasion where Sarah Palin was able to look more intelligent than Barack Obama. OK, my kid sister is more intelligent than Barack Obama but we have to fight the election on what we can do to repair the mess that Brown has created not allow ourselves to ber distracted/

longrun2, have you seen the usual quality of his tweets?

DavidWrightMP @wokotsane going to slag the council press office are you? Hmm probably not. Sad

DavidWrightMP @wonkotsane Unions ballot on use of political fund. Can you say same of your mate ashcroft or companies use of shareholders money???

Quite. Under the last Tory government we had far wittier ministers, like Alan Clark. They were able to combine their vituperation with an elegant turn of phrase; this in contrast is just coarse.

"northernheckler
And now it's reported that his Twitter account had been hijacked. Which is pretty credible actually, "

That scenario is about as credible as a Labour politician resigning for being corrupt.

God Labour are such imbeciles.

Never heard of this politician before but he's offensive, a trougher and tells blatant lies instead of owning up and apologising. His second tweet is possibly even more offensive. The fact that he thinks he's done nothing wrong until it hits the papers and then tries to deny it means he's an arrogant twat too.

And this one's a bloody Minister! In charge of running some aspect of the country.

I can't wait to vote these incompetent bastards out. I feel physically ill now every time a Labour MP turns up on telly.