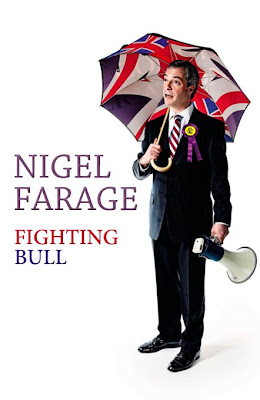 On March 22nd, Biteback is publishing FIGHTING BULL, the autobiography of Nigel Farage. As regular readers know, I've always got on rather well with Mr F so I was delighted he agreed to do the book. I read the manuscript a couple of weeks ago and I can promise those who buy the book an extremely entertaining read. It's painfully honest, at times quite moving (especially the story of him getting testicular cancer at the age of 22) but also riproaringly funny. Anyway, enough from me, here's what the Biteback marketing blurb says...

In an age of colourless bureaucrats, Nigel Farage is a politician you are unable to ignore. Farage, who recently resigned as leader of UKIP, divides the political establishment, causing controversy and admiration in equal measure. What cannot be denied is the effect he has had on British politics. A founder member of UKIP, he was elected to the European Parliament in 1999, and re-elected twice. Becoming party leader in 2006, much of the electoral success of UKIP – the party David Cameron famously described as “fruitcakes and loonies and closet racists” - can be put down to Mr Farage’s charismatic leadership, his robust appearances on TV and radio, and his tendency towards the limelight. Farage describes growing up in London, where, after a boisterous youth at Dulwich College, he become a City trader at the height of Thatcher’s yuppie paradise, becoming involved in politics only after John Major’s government signed the Maastricht treaty in 1992. He claims Enoch Powell as a hero and is an avowed fan of lapdancing.

However, Farage’s life and career has not been as smooth as his charming exterior, from a News of the World Sex Scandal in 2006 to the reporting by the Guardian in May 2009 that over ten years as a member of the European Parliament he received and spent nearly £2 million of taxpayers’ money in expenses and allowances, on top of his £64,000 a year salary. Fighting Bull also describes his near death in a car accident at twenty one, and his later diagnosis of testicular cancer.

Ironically, when the expenses scandal hit in UK politics, UKIP found itself ideally placed to take advantage. In September Farage announced he would stand against John Bercow, the newly elected Speaker of the House of Commons, in his Buckingham constituency in the next election, despite a convention that the speaker is not challenged for re-election - in protest at Westminster’s handling of the MPs’ expenses scandal. Fighting Bull is a candid, colourful life story by a fascinating and controversial character.

Should that have tickled your fancy, you can preorder the book HERE.

I also love his work.... balls... another purchase I might have to make.

Even after his cancer, he still has more balls than the entire Cabinet put together.

As for Dave, if he ever grew a pair, they have returned back from whence they came over the issue of UK Sovereignty and a referendum on the Lisbon Treaty.

That, or Dave is a Quisling.


Dave has balls? Ok. He is a Quisling.

Guido is reporting that the BBC are on red alert for an election announcement over the weekend. Presumably this is the last chance for March 25.

I do hope that you didn't write that incoherent babble that is the Biteback blurb...

I guess that title is a pun.

I hope he makes it to The Commons. There he can find a lot more bull to fight.

Nigel Farage is the kind of MP we should have. Like Danial Hannan, he does not fark about with niceties, which these days are just another brick in the wall.

I think that you give far too much publicity to Farage and his noisome friends.

This link was just posted on Popbitch (it's about yer man Farage):

@Paddy Briggs "I think that you give far too much publicity to Farage and his noisome friends."


If that was how Iain balanced his publicity, he would mention New Labour at all.

I used to work with Nigel and was a regular drinking and lunching companion. Sadly I have not seen him often in the last 10years.
I look forward to finding out if he has been honest about his colourful past.........