What is Compassionate Conservatism? 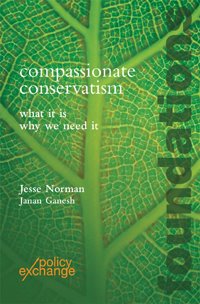 Compassionate Conservatism is a term wich means many different things to many different people. So Jesse Norman's book, published next week, is a welcome development. It's published by Policy Exchange (of which I am a trustee) and is probably the first attempt by anyone to seriously define the Cameroonian political philosophy. Jesse has written a piece for Comment is Free today, which you can read HERE. Here's a short excerpt...

Good politicians succeed within the boundaries of the possible. Great politicians change the boundaries of politics itself. After six months, we can already see that David Cameron is changing the basic terms of the political debate. Not merely at the level of language, as New Labour did, but at the level of ideas. This is what is so confusing to commentators such as Neal Lawson. Today... we need need a conservatism that is neither paternalist nor economically individualist; a conservatism that does not say either "big brother is looking after you" or "you're on your own". In a new book for the thinktank Policy Exchange, I and my colleague Janan Ganesh show that there is another, all-but-forgotten, conservative tradition that fits the bill perfectly. It has its roots in the work of Adam Smith and Edmund Burke, and its modern flourishing in that of Michael Oakeshott and Friedrich Hayek...This tradition is not paternalist, because it is realistic about the capacity of the state to improve our lives; and because it does not assume a relation of subservience between "we" and "they", between governed and governor. It thus rejects the unreflective statism of Gordon Brown... This tradition is a distinct and substantive one, unnoticed in political debate for decades. It is recognisably conservative in its scepticism about the power of government, its respect for institutions, its pluralism, and in the scope it accords for individual energy to flourish. And it is compassionate both in the root sense of acknowledging our fellow-feeling with each other, and in drawing the circle of our moral concern around those with whom we are, and have been and will be, interdependent. It is by intuitively seeing the social need - and the space within current politics - for this tradition that David Cameron and the modern Conservative party are changing the terms of the debate. He is showing, not that Britain is a not conservative country, but precisely that it is. It is a measure of his success that commentators such as Neal Lawson are still seeing these things in the old terms of left and right, and of language rather than ideas. On the contrary, it is egalitarian. It sees our elected politicians as the Ancient Greeks saw them: as citizens first and foremost, in whom a temporary, limited and qualified trust has been placed to exercise public power on our behalf. This trust in turn implies mutual consideration and respect, and a pushing down of power and accountability away from the centre and towards the people."

You can buy the book from Politico's HERE. It costs a tenner. Jesse Norman has more his website HERE.
Posted by Iain Dale at 5:27 pm

"Compassionate Conservatism" huh? Is this the latest oxymoron to add to my list like "military intelligence" and "civil engineer"? Nah, sorry, not convinced!

There is no need to buy this book. Anyone who has been a Conservative and a Christian will know that compassion has always been at the Party's political core. If you want to read a book on Margaret Thatcher's engagement with Christianity and Conservatism, I wholeheartedly recommend the book (of that title) by Michael Alison MP and DAvid Edwards. Compassionate Conservatism is indeed nothing new, but it is at its best when expressed through faith.

Iain - I have read the extract and have several reservations which I will post later. What I really want to know is what on earth are 'Compassionate Conservatives' in Kirklees doing getting into bed with the useless, dim and lazy bigots on the far right? Recess Monkey has higlighted the fact that Kirklees is now Tory controlled thanks to the support of three BNP councillors.

I know it's been said before but some of your longer posts would be much easier to read if you broke the text up into more paragraphs.

I love it when you Tories bull yourselves up.

Apart from Ted Heath and his courageous entry into the EEC, name one great decision that justifies the term 'compassionate' regarding the Tories?

I'll give 'Dave' his due, he is at least trying, but to achieve that progression to humanity to ones country,'Dave' is having to fool, cheat and lie to his fellow Tories.

This process was done by de-Nazification in 1945 onwards and the de-Baathification going on now.

name one great decision that justifies the term 'compassionate' regarding the Tories?

Err.. the abolition of slavery? Prison reform? Education for the poor?

Get a history book, Gary, these were Tory reforms for the oppressed and disadvantaged. Compassionate to the core.