It Will Be MPs in Marginal Seats Who "Do" For Blair 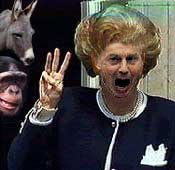 There's an interesting thread HERE on PoliticalBetting.com today asking the question: Will Talking Up Blair's Departure Hasten It? Quite clearly the answer is yes, but the one thing people seem to be missing in this discussion is the fact that the latest Brownite to call for Blair to go sooner rather than later is an MP who has a marginal seat. Step forward Michael Wills. It is MPs like Michael Wills who will do for Tony Blair in the end. There is a good parallel to be drawn between Blair's situation and Margaret Thatcher's downfall in 1990. Margaret Thatcher fell not because of the Poll Tax, not because of Europe, not because she was seen as overbearing. She was overthrown because too many Tory MPs in marginal seats began to see her as an electoral liability who would lose them their jobs. And the same thing is happening to Tony Blair.

As Blair's authority gradually ebbs away, MPs like Michael Wills will become braver and speak out more openly. And before you know where you are the trickle of discontent has become a flood. And once that happens, it's curtains. And in his heart of hearts Tony Blair will know that. On top of this the cash for peerages inquiry will rear its ugly head again very soon. If, as looks likely, Inspector Knacker is pointing his finger at former Labour Party chairman Ian McCartney and Number 10 Director of Government Relations things will look very bleak indeed for the Dear Leader. At that point expect the likes of Michael Wills and his ilk to be even more vocal than they are being at the moment. Hat-tip for graphic to www.bigfib.com

UPDATE: There is even worse news for Tony Blair HERE. And this is a key difference between his situation and Margaret Thatcher's in 1990. She always knew she retained the confidence of Conservative Party members, who, if it had been put to a vote, would have backed her to the hilt - I'd say by an 85-15% margin. I suspect if there were a vote today among Labour Party members Blair would lose it by a small margin. And this is what will make MPs in marginal seats even bolder in what they say.
Posted by Iain Dale at 1:53 pm

Yet another shameless attempt by Anthony Blair to steal the clothes of the useless Tories, now cross dressing as the iron lady herself he hopes to cling onto the trappings of power with this latest "makeover" , although I don't hate poofs and crossdressers I think we deserve better in a prime minister.

I can't wait! I want Blair to go in utter humiliation, leaving Downing St with face drawn (for once, not an act) and his fat, greedy wife looking angry and aggrieved. Ideally, he will also be facing prosecution for selling peerages. That would be so good it would ALMOST obviate the need for an entire bottle of Champagne per person.

I guarantee you one thing, if he is facing prosecution, they will scarper. They'll try Sylvio first.

I agree with much of that, although the parallel between Thatcher in 1990 and Blair now is slightly weak, as the 1922 committee had formal mechanisms for removing the leader that the PLP currently lacks.

Sorry, but you are all still thinking about this in strictly political terms. TB is not - he is thinking in economic terms: how can I make enough money to support my mortgages + Cheries hair post-10 Downing Street? He no longer has any hope of becoming President of Europe, so the only chance is to follow Clinton on the speaking circuit. But that requires (a) being popular in the US (no other speaking circuit pays enough) and (b) leaving on a high note (otherwise the Americans will see him as a loser, ergo no speaking).
So, TB won't leave until he can be seen to have succeeded with something. This could be that Iraq sorts itself out, so that he and Dubya are seen as great heroes of democracy, which was the hope when he said he wouldn't fight the next election. But Iraq sorting itself out is many years in the future, so (a) don't expect a general election before the last minute, in 2010 and (b) maybe TB will have to stay on and fight that one after all...

I think the Gruaniads use of the phrase " Labour's remaining members" is telling in itself.

Doers any body have any idea who actually voted for Blair at the GE last year - other than self-filling Postal Vote Forms?

do you have a list of the the 50 most vulnerable seats. would like to see which MPs should be panicking

I see that later in the report Ed Balls (up), the Treasury minister, intends to expose the "emptiness" of David Cameron. He might like to first of all practice this on the skulls of a few cabinet colleagues, including "3 Shags". He will probably discover there is something remarkably akin to a total vacuum!

Anonymous - Stated with precision and prescience! Blair and his wife want money. The grandiose notion of president of Europe with his very own Air Force One and marines saluting as he gets off - oh, wait a minute! Europe doesn't have any marines! OK, immigrant schoolchildren doing ethnic dances - is dead in the water.

My own thinking had been a lucrative EU consultancy in DC for which he could be the front man - especially if he's "Lord" Blair by then. "Lord Blair can see you now." "Hi! Call me Tony!" - and it could also be the platform for speaking engagements - if he doesn't lose face by losing the election and becoming a has-been.

It will depend on how disgraced he is on leaving office. If they get him on sleaze like selling peerages, he wouldn't have much future in the US. Hmmm. And Malaysia's out...

The Guardian seem to be a little bit behind on the comparison between Tony Blair and Mrs Thatcher that I made on my blog here.

If it was the real Peter Hitchens that commented above, I would have expected him to have mentioned the fact that Mrs Thatcher fell from power because those liberals who were pro-Europe moved against here when she spoke out against the European Union. Though of course, her fall was a combination of a number of factors, this was one of the main, if not the main one.

anonymous... about 9.5 million people. There were less than 4 million postal votes, and we must surmise at least some Tories were bright enough to complete them.

Iain - In quoting pb.com, you seem to be ignoring the key poll finding that Mike Smithson has been banging on about for months - that is that Dave consistently fares signicantly better pitched against Brown than against Blair.
The Dour One might find favour in Scotland (obviously), Wales and the North, but in "middle England", where the next GE will be won and lost, he is deeply unpopular, especially amongst actual and potential Tories.

There's a school of thought that says TB will hang around until there is a credible, preferably English, alternative to Brown - the betting suggests Alan Johnson.

Anonymousette - thank you for your kind words. I like the "EU consultancy, principal Lord Blair of Baghdad" thought - definitely an enhancement of the "It's the income, stupid" theory of when/if TB leaves.
The more you think about it, the better this theory holds - why else the keenness of a Labour PM to be friends with George W. (even at the extreme expense of taking an extremely reluctant country to war in a faraway country of which we know little)? Or with Berlusconi for that matter - can you see Kinnock or John Smith - never mind Michael Foot - in cahoots with those guys?
No, if you want to predict TB's moves, cherchez l'argent!

Actually, Anonymous, the one depressing aspect of my scenario is, the Bush family takes care of its friends. It's a patrician thing. I'm just hoping Tony comes such a cropper that they feel excused.

I've always thought a consultancy in DC, The Blair Group, specialising in consulting on the EU - in other words, vigorish - would allow Tony to ponce around feeling madly David Nivenesque. And he could give his after dinner talks - self-deprecating, charming (he'll need a good speech writer), witty (a really, really good speech writer)and vacuum it up, which is what he and Cher are all about.

I hope he leaves office in disgrace so he can't pursue this line, either. That would be the EU Presidency, the DC consultancy and Malaysia closed off to them.

But anonymous is right about him having to go out on a high note.

I would prefer to see him facing trial for war crimes but that may take the rise of the next political generation.

Neil Craig - The only place they will pay money to listen to Blair talk is the United States - and even that is dependent on him not falling on his face before he leaves office. God willing the selling of peerages will hit at a bad time and wreck his chances in DC.

What the hell is going on with the police investigation into peerages? If there is no case to answer why is Jack Dromey still Labour Treasurer?