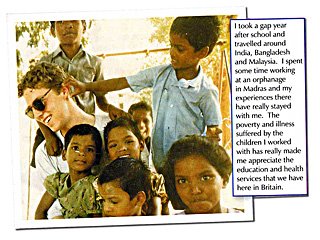 Now in case you can't read the article from Ben Abbotts' HELLO MAGAZINE style gorgeous little newsletter, currently being distributed to the good burghers of Bromley & Chislehurst, let me repeat it for you.

I took a gap year after school and travelled around India, Bangladesh and Malaysia. I spent some time working at an orphanage in Madras and my experiences there have really stayed with me. the poverty and illness suffered by the children I worked with has really made me appreciate the education and health services that we have here in Britain.

Heartwarming stuff, isn't it? Well, it would be if it had been like that. Reading the above text you'd think that Ben spent most of his gap year working at the Madras orphanage, wouldn't you? A year working with poor little starving children. Well, nine months at least. Ok then, six. No?

Well according to someone who was very close to young Ben at the time, it was considerably shorter than that. And I mean much shorter. As in hours rather than days. Perhaps not time enough to appreciate the poverty and illness of children, but certainly enough for a budding career politician to get a good photo op!

So when Ben says "I spent some time working at an orphanage in Madras" could he clarify exactly what "some time" means? And is it true that he merely stopped over in Madras before spending the rest of his trip playing polo at the Malaysian equivalent of Dorneywood?

I am looking forward to doing a bit of canvassing tomorrow in Bromley. If I see Ben, I'll be sure to say hi.
Posted by Iain Dale at 10:07 pm

Why, is that the sound of the bottom of a barrel being scraped that I hear? I think it is!

Oh go on Iain, break your sudden vow of silence ... surely you must have read a story or two today about Cameron's flip flop on Iraq (first he agrees with Labour, then he agrees with the Lib Dems, now he agrees with Labour again) or about Bob Neill's little difficultly in making a false declaration on his nomination paperwork (saying he did not at the time he signed the paperwork hold any disqualifying offices, when in fact he did).

Your silence is most unlike you. One might almost thing you're a litte red-faced...!

I agree Rob, I couldn't believe he would stoop that low. :)

Mike, go back to the other thread.

mark p, actually scrub that, I can't remember which one it was on. Cameron hasn't flip flopped on Iraq, as evidenced by what he is saying on Jonathan Ross at the moment. The leaflet was a pale imitation of a LibDem by election leaflet which didnt work.

And your point about Bob Neill is rubbish. The SRA is being abolished at the end of the month so your point is erroneous.

As far as I'm concerned, experience working in an orphanage in Madras is not a qualification for being a British MP.

The orphans are better attended by people who speak their language, know how to teach useful subjects in their language and know how to cook their food. This self-regarding, Mr Great Spirit, attitude would be a definite negative from my point of view.

Even if he had spent a couple of weeks there, what did he think he had to offer - given that he can do none of the above? In other words, unless he was cleaning out the latrines and mopping the halls, he was a passenger. Let us hear what his actual tasks were in this "work".

Malaysia does have great polo, especially in Johore Bahru.

Isn't that Jerry Maguire in the picture?

Just to put Lib Dem claims for the Bromley and Chislehurst By-election in context here is what they said about their chances last February for the local elections:

"Liberal Democrat National Campaigns Officer Duncan Borrowman - who lives here in Bromley Borough said: "The Lib Dem success, and the total failure of David Cameron to reverse Conservative fortunes is a pointer to massive advances by the Lib Dems in Bromley Council Elections in May."

So what was the result on May 4th in Bromley?

Rather puts the two horse race in context.

What does he mean by "working"?

If he thinks "working" is attending a photo shoot, that hardly bodes well for the "work" he is going to do for his constituents, in the unlikely event he is elected.

But the Iraq story in the Dunfermline leaflet was a personal message from David Cameron, with his signature at the end of it.

As for Bob Neill - it doesn't matter if the body is being abolished. The law doesn't give you any let out - you have to sign an official legal document promising that at the time you sign it you are not disqualified. That's why other candidates have had to resign from health authorities in the past - and why people who are too young when nominated but will have their birthday before polling day can't stand either.

Your line seems to be "oh so what if he broke the law, it doesn't really matter". I look forward to consistently reading the same generousity from you about people from other parties :-)

Would that be the Duncan Borrowman who spent a £1000 before the local elections in Chelsfield and Pratts Bottom ward and then lost by 1000 on a swing of 7% against him?

We are straying from the point. Forget Cameron et al.Did Abbotts misrepresent his involvement with a Madras orphanage? If he did its nothing new amongst politicians. But the voters of C+B may wish to have fuller and better particulars of the bleeding heart's activities in Madras. He should not be allowed to try his Princess Di skills on the voters.

That leaflet in Dunfermline wasn't a poor imitation of a Lib Dem leaflet. It was a LibDem leaflet.

No one in the Conservative campaign - locals and otherwise - could find out who authorised it and put it down as an overenthusiastic member going maverick.

Only after the by-election, when a lot of other questionable LibDem tactics had been used was it realised that it was a dummy.

Remember whose letterbox it had been stuffed through? And who would gain from the issue of Iraq being raked up again?

The party should just stick these quotes in a prominent corner of their leaflets and leave it at that. Then we don't even have to address any of their bogus arguments but simply point to the opinions of impartial journalists.

"[In the Dunfermline and West Fife by-election] the "Liberal Democrats fought an entirely fraudulent campaign based on a wholly bogus prospectus."
Alan Cochrane, Political Correspondent, The Scotsman newspaper, February 2006

"[In the Moray by-election] the Liberal Democrats took their own quotes from a report in this newspaper... and reproduced them in campaigning literature as 'The Northern Scot'...Did they really think that readers...would be stupid enough to believe that this newspaper would prejudice its reputation for impartial political reporting? This scam has been tried elsewhere by the Liberal Democrats, so they cannot pretend the manipulation of the comments was a mistake."
Pauline Taylor, Editor of the Northern Scot newspaper (Moray), April 2006.

Griswold - That was my point, too. What did he do at the orphanage in Madras, and for how long? My suspicion, he posed for photos showing him relating none-patronisingly and in an absolute natural manner, to Third Worlder children. How using these orphans demonstrate his ability to serve constituents in Britain is not addressed. It reeks of cheap opportunism. Voters beware. He will try to use you to advance himself, too.

Oh nice one Ayr Man. Got any more info on how this infamous leaflet came about then?

I'll be at the bottom of here all week.

Given that he went to the Chaucer Tech, I very much doubt he knows me the meaning of the word 'Polo', aside from thinking it is a tasty piece of confectionary that one can either eat or flick that their teacher.

Mark P is spot on.

You have to be eligible at the point when you sign those papers for nomination. This may be a legal nicety, but it is a valid one. I've certainly had candidates withdraw at the last minute to avoid this problem. It opens the Tories up to the possibility of a legal challenge to the result, should they win.

If Mr Abbotts had the foresight, in a gap year after school, to realise that a photo like this would come in handy in a by-election 15 years later, he really is worth electing ;-)